Yesterday, I suggested that there was a history of social sciences to be told. A history that would talk about the problems scientists faced and about their solutions. It would use our present knowledge to better understand the knowledge of the past.

One of the reasons why it often seems impossible to write such a history is that we have the impression that the philosophers of the past, with their very different backgrounds, very different preoccupations, and very different ways of proving their points, are completely alien to contemporary science. As a response to this skepticism, I would like to take the example of the distinction between intuitive and reflective judgement, a distinction that we have often discussed here.

"Intuitive beliefs are experienced as plain knowledge of fact without attention and generally without awareness of reasons to hold them to be facts. Reflective beliefs are held for reasons that are mentally entertained. These reasons can be of two kinds: the authority of the source of the belief, or the sense that their content is such that it would be incoherent not to accept them." (more here)

At first, this distinction seems highly modern since it requires the concept of intuition and modularity to be understood. However, it is fascinating to see that it is already visible in the work of some ealier philosophers, as in Adam Smith's Theory of Moral Sentiments.

Like several other Scottish philosophers, Smith thought that the mind was composed of many specialized mental functions (such as the moral sense) that give us intuitions about the way we should act. 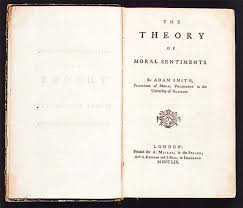 With the idea that a great part of our mental life is the product of unconscious and specialized mechanisms, Smith had the potential to draw the intuitive/reflective distinction. Indeed, like modern anthropologists, Smith notice that we sometimes act on the basis of non intuitive processes such as when we relie on someone else's opinion or when we follow an accepted rule.

"Many men behave very decently, and through the whole of their lives avoid any considerable degree of blame, who yet, perhaps, never felt the sentiment upon the propriety of which we found our approbation of their conduct, but acted merely from a regard to what they saw were the established rules of behaviour. The man who has received great benefits from another person, may, by the natural coldness of his temper, feel but a very small degree of the sentiment of gratitude. If he has been virtuously educated, however, he will often have been made to observe how odious those actions appear which denote a want of this sentiment, and how amiable the contrary. Though his heart therefore is not warmed with any grateful affection, he will strive to act as if it was, and will endeavour to pay all those regards and attentions to his patron which the liveliest gratitude could suggest. He will visit him regularly. he will behave to him respectfully; he will never talk of him but with expressions of the highest esteem, and of the many obligations which he owes to him. And what is more, he will carefully embrace every opportunity of making a proper return for past services. He may do all this too without any hypocrisy or blameable dissimulation, without any selfish intention of obtaining new favours, and without any design of imposing either upon his benefactor or the public. The motive of his actions may be no other than a reverence for the established rule of duty, a serious and earnest desire of acting, in every respect, according to the law of gratitude. A wife, in the same manner, may sometimes not feel that tender regard for her husband which is suitable to the relation that subsists between them. If she has been virtuously educated, however, she will endeavour to act as if she felt it, to be careful, officious, faithful, and sincere, and to be deficient in none of those attentions which the sentiment of conjugal affection could have prompted her to perform."

What is more interesting is that Smith shows that the two processes (intuitive and reflective) may lead to different behaviours in the same circumstances:

"Such a friend, and such a wife, are neither of them, undoubtedly, the very best of their kinds; and though both of them may have the most serious and earnest desire to fulfil every part of their duty, yet they will fail in many nice and delicate regards, they will miss many opportunities of obliging, which they could never have overlooked if they had possessed the sentiment that is proper to their situation. Though not the very first of their kinds, however, they are perhaps the second; and if the regard to the general rules of conduct has been very strongly impressed upon them, neither of them will fail in any very essential part of their duty. None but those of the happiest mould are capable of suiting, with exact justness, their sentiments and behaviour to the smallest difference of situation, and of acting upon all occasions with the most delicate and accurate propriety. The coarse clay of which the bulk of mankind are formed, cannot be wrought up to such perfection. There is scarce any man, however, who by discipline, education, and example, may not be so impressed with a regard to general rules, as to act upon almost every occasion with tolerable decency, and through the whole of his life to avoid any considerable degree of blame."

I like particularly the last example because it is about morality and because, in line with contemporary studies, it shows that although we may have reflective utilitarian judgements (maximizing the welfare of the group), our intuitions are clearly non utilitarian!

Picture: The Footbridge dilemma: You may find it more rational to save five by pushing the guy on the bridge. However, intuitively, you can't help thinking that this actions would be deeply wrong.

"A sentinel, for example, who falls asleep upon his watch, suffers death by the laws of war, because such carelessness might endanger the whole army. This severity may, upon many occasions, appear necessary, and, for that reason, just and proper. When the preservation of an individual is inconsistent with the safety of a multitude, nothing can be more just than that the many should be preferred to the one. Yet this punishment, how necessary soever, always appears to be excessively severe. The natural atrocity of the crime seems to be so little, and the punishment so great, that it is with great difficulty that our heart can reconcile itself to it. Though such carelessness appears very blamable, yet the thought of this crime does not naturally excite any such resentment, as would prompt us to take such dreadful revenge. A man of humanity must recollect himself, must make an effort, and exert his whole firmness and resolution, before he can bring himself either to inflict it, or to go along with it when it is inflicted by others. It is not, however, in this manner, that he looks upon the just punishment of an ungrateful murderer or parricide. His heart, in this case, applauds with ardour, and even with transport, the just retaliation which seems due to such detestable crimes, and which, if, by any accident, they should happen to escape, he would be highly enraged and disappointed. The very different sentiments with which the spectator views those different punishments, is a proof that his approbation of the one is far from being founded upon the same principles with that of the other. He looks upon the sentinel as an unfortunate victim, who, indeed, must, and ought to be, devoted to the safety of numbers, but whom still, in his heart, he would be glad to save; and he is only sorry, that the interest of the many should oppose it. But if the murderer should escape from punishment, it would excite his highest indignation, and he would call upon God to avenge, in another world, that crime which the injustice of mankind had neglected to chastise upon earth." Note that it may be possible to find earlier predecessors than Smith. Think about the classical distinction between reason and passion, or reason and imagination. Isn't there an implicit distinction here between unconscious, implicit and effortless mechanisms on one hand, and conscious, explicit and effortful mechanisms on the other? Think, for instance, of Descartes's Sixth Meditation:

"I remark, in the first place, the difference that subsists between imagination and pure intellection [or conception ]. For example, when I imagine a triangle I not only conceive (…) that it is a figure comprehended by three lines, but at the same time also I look upon (…) these three lines as present by the power and internal application of my mind (…), and this is what I call imagining. But if I desire to think of a chiliogon, I indeed rightly conceive that it is a figure composed of a thousand sides, as easily as I conceive that a triangle is a figure composed of only three sides; but I cannot imagine the thousand sides of a chiliogon as I do the three sides of a triangle, nor, so to speak, view them as present [with the eyes of my mind ]. And although, in accordance with the habit I have of always imagining something when I think of corporeal things, it may happen that, in conceiving a chiliogon, I confusedly represent some figure to myself, yet it is quite evident that this is not a chiliogon, since it in no wise differs from that which I would represent to myself, if I were to think of a myriogon, or any other figure of many sides; nor would this representation be of any use in discovering and unfolding the properties that constitute the difference between a chiliogon and other polygons".

Here, we have a distinction between spatial intuition and geometrical reasoning. The two phenomena do not work in the same way, although they may sometimes allow us to think about the same thing (e.g. a triangle). I guess that a better historian than myself could even trace the story back to Aristotle and Plato. My point here was just to illustrate the fact that the philosophers of the past, although they lived in different social universes, were struck by the same problems and sometimes led to the same distinctions. The example of Adam Smith is particularly relevant here because he used the classic distinction between reason and passion 1) within a quasi-modularist framework and 2) with the idea of explaining social phenomena in mind.

Now, what lessons can we draw from Adam Smith's implicit distinction between intuitive and reflective processes? That modern anthropologists and psychologists owe a big debt to the Scottish philosopher? I don't think so (but you'd be better off asking Dan Sperber himself, maybe he was influenced by The Theory of Moral Sentiments at some point!). However, what this short and very incomplete history of the distinction between intuitive and reflective beliefs suggests is that this basic distinction may not be so hard to pick out. It suggests that the hardest thing was probably to understand the cognitive basis of reflective processes. Do they require language? Are they metarepresentational? What is their function? And so on. But that's another story.

One of the reasons why it often seems impossible to write such a history is that we have the impression that the philosophers of the past, with their very different backgrounds, very different preoccupations, and very different ways of proving their points, are completely alien to contemporary science. How could someone living in a kind of theocracy (as many countries were for a long time, even in Western Europe) and relying only on its own limited particular knowledge and intuitions have something in common with modern scientists?