Written by Nicolas Baumard on 18 October 2010 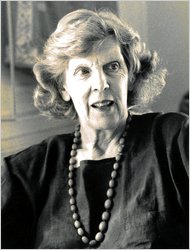 Philippa Foot died at her home in Oxford, England, on Oct. 3, her 90th birthday (see the NYT here and the Guardian here, and note the difference). In her career, she defended the view that moral judgments have a rational basis and that they can be said to be true or false. Her writing also helped establish virtue ethics as a leading approach to the study of moral problems. She insisted that virtues like courage, wisdom and temperance are indispensable to human life and the foundation stones of morality.

Her work was thus primarily normative. However, she may be remembered more for her description of moral judgements and her indirect contribution to moral psychology. Indeed, along with Judith Thomson, she is the inventor of the trolley dilemma.

In 1967, in the essay "The Problem of Abortion and the Doctrine of the Double Effect," Philippa Foot discussed the moral distinctions between intended and unintended consequences, between doing and allowing, and between positive and negative duties — the duty not to inflict harm weighed against the duty to render aid.

The most arresting of her examples, offered in just a few sentences, was the ethical dilemma faced by the driver of a runaway trolley hurtling toward five track workers.

Foot's original formulation of the problem ran as follows:

"A trolley is running out of control down a track. In its path are five people who have been tied to the track by a mad philosopher. Fortunately, you could flip a switch, which will lead the trolley down a different track to safety. Unfortunately, there is a single person tied to that track. Should you flip the switch or do nothing?"

But what about a surgeon who could also save five lives — by killing a patient and distributing the patient's organs to five other patients who would otherwise die? The math is the same, but here, instead of having to choose between two negative duties — the imperative not to inflict harm — as the driver does, the doctor weighs a negative duty against the positive duty of rendering aid.

In another famous and now inseparable article, Judith Thomson challenged this solution. There are situations, she argued, where killing five can be worse than killing one.

One such case was the 'Footbridge Trolley":

"As before, a trolley is hurtling down a track towards five people. You are on a bridge under which it will pass, and you can stop it by dropping a heavy weight in front of it. As it happens, there is a very fat man next to you – your only way to stop the trolley is to push him over the bridge and onto the track, killing him to save five. Should you proceed?"

Here, clearly, we should not push the fat man.

What is the difference between Foot's Trolley and Thomson's Footbridge?

Since the publication of Thomson's article, many solutions have been proposed:

Like Foot, some say that it is a matter of principle, here the principle of double effect which says that you may take action which has bad side effects, but deliberately intending harm (even for good causes) is wrong. The difference between the two cases is that in the second, you intend someone's death to save the five, and this is wrong, whereas in the first, you have no such intention.

Others, like Thomson, say that it is matter of rights. In the first case, nobody has a greater right than anyone else not to be run over, but in the second case, the fat man has a right not to be pushed in front of the trolley.

Supporters of utilitarianism (according to which it is more rational to always save the five) have a more radical solution to the problem. They claim that our intuition is wrong here and that we are probably confused by some irrelevant features (like the violence in the action of pushing someone from a footbridge).

Why is the trolley dilemma and its sequel so important? And why is it so important for cognitive and evolutionary anthropology? At first sight, the dilemma does not present anything new. The observation that the dominant doctrine of utilitarianism (i.e. maximizing the number of lives saved) often conflict with moral intuitions is not particularly original. Before Foot, many had noticed that we may refuse to sacrifice a group of individuals even if it allows saving many more individuals in another group.

I think the trolley dilemma is important for at least three reasons:

1. The first and most obvious contribution of Foot's trolley is that it raises new questions and suggests that we do not have an adequate theory of moral judgements. It's one thing to show that utilitarianism is not good. It is another thing to demonstrate that we are going to need something new to explain such subtle moral differences as the one between killing a guy on a bridge and killing a guy three meters below the bridge! Before the trolley dilemma, many in psychology and anthropology thought that morality was just a question of empathy or rules abiding ("dont'be evil" for instance, etc.). In economics or biology, it was a matter of "helping each others" or "maximizing the community's welfare". All of the sudden, it now looked like there was a huge need of news theories and new data. With the trolley dilemma, it could not be a simple question of maximization or empathy anymore. It was more complicated. Morality became as exciting and puzzling as linguistic. The trolley dilemma awoke us from our dogmatic slumber.

(On that matter, note that Foot was not satisfied with her deontologist solution. Commenting on our refusal to sacrifice one person to save five, she wrote: "it cannot be a magical difference, and it does not satisfy anyone to hear that what we have is just an ultimate moral fact" (Foot, 2002, p. 82). In other words, what Foot suggested is that even if we found some robust principles that can describe adequately the whole of the moral logic, we will still have to explain the origin of these principles).

2. The other obvious contribution of the trolley dilemma is to show that we do not have access to the rationale of our moral judgements. The very proof of that is that even specialists (i.e. professional philosophers) disagree on why we think killing is OK in the standard trolley case but not OK in the footbridge case. More generally, most of the time, people are unable to formulate an explanation for their apparently conflicting intuitions of the two dilemma (see A dissociation between moral judgements and justifications by Cushman, Young and Hauser's article for instance).

This contradicts the accepted view according to which morality is a highly reflexive activity, akin to philosophy or law in this respect, in which we consciously evaluate reasons, arguments and rules. By contrast, it promotes an intuitionist view according to which morality is like language: a fast, automatic and unconscious activity (see Haidt's famous article on the emotional dog and its rational tail, and Hauser & Co. and Mikhail's articles on the analogy between language and morality).

The intuitionist view of morality is of particular importance for students of culture. Indeed, in anthropology, the accepted view is that moral norms are explicitly taught and that's why they differ from one place to the other. But what if people do not know the rationale of their intuitions and are unable to provide arguments or even cues to their judgement? How are they going to teach moral rules? Furthermore, the trolley problem is totally new to people. It is not a standard question: people have not been taught about the rule to follow in such cases. Thus, where does their intuition come from? From a kind of casuistic? A vast stock of previous cases carefully examined by elders and authorities? This sounds unlikely. To sum up, the trolley dilemma suggest that cultural learning is not enough. Something else, like a moral sense, is required to be a moral being.

3. Finally, the trolley dilemma has promoted a new way to study morality. Not only it raises questions (what is the difference between the footbridge and the trolley?), but it also suggests a way to answer these questions: by comparing what linguists call 'minimal pairs' of scenarios. You take a story, you change only one feature (you move the guy on the tracks up on a footbridge) and you observe people's judgements about the new situation (in the trolley, for instance, moving the guy seems to matter…). Here, Judith Thomson is probably the queen and I can't resist quoting in extenso her variant of the trolley dilemma she devised to show that it is possible to imagine a situation where it is not OK to divert the trolley, provided that you give enough rights to the guy alone on the tracks:

"Suppose, for example, that there is a fence protecting the straight track, and a large sign that says "DANGER! TROLLEY TRACKS!" But five thrilled seekers decided "What fun!", so they climbed the fence and they now seat on the straight track, waiting for the sound of a trolley and placing bets on whether if a trolley comes, the driver will be able to stop it in time. The man on the right hand track is a gardener. Why a gardener? The right hand track has not been used in many years, but the trolley company is in the process of constructing new stations and connecting them with the old ones via that right hand track. Meanwhile, it has hired a gardener to plant geraniums along the tracks. The gardener was much afraid of trolleys, but the trolley company gave him its assurance that the track is not yet in use so that the gardener will be entirely safe at work on it." (Thomson, 1990, p. 180)

Of course, that is not really a 'minimal pair' but it gives a sense of Thomson's point and since then many more minimal pairs have been invented by psychologists to disentangle various moral theories. Although this way of studying morality, sometimes jokingly called "trolleyology", can looks a bit artificial, it provides a way to solve problems and refute moral theories. And that's not bad news!

To conclude, it is interesting to note that it all began with a debate on abortion (later on, Thomson also wrote another outstanding article about abortion using the minimal pair method). In other words, this new way of describing morality started as a way of thinking about normative issues ("is abortion OK?") and move to a descriptive debate ("why killing is OK in some situations and not in others?)". Years later, it seems that Foot's article is not simply a landmark contribution to philosophy (and later to psychology), it symbolizes the beginning of the independence of the descriptive study of morality (as opposed to its normative study). Before Foot and Thomson and their thought experiments, the description of morality was just an appendix, a prerequisite for any normative theory of morality (see the beginning of Rawls's Theory of Justice for instance). Philosophers had to study intuitions to show that their theories were intuitive or, on the contrary, to suggest that they rightfully contradict common sense. The trolley illustrates a change toward more independence for the descriptive side of the study of morality. Of course, there were already many students of morality, but they focused more on meta-ethics questions (what is the status of moral judgements?) or on very psychological questions (is morality based on emotions?), and most of the time, there was a normal agenda behind these questions. With Foot and her trolley puzzle, it is the logic of moral judgements itself that became the center of attention.