Written by Gloria Origgi on 1 October 2009

(Jon Elster has just published (in French) the first volume of a trilogy: Le désintéressement : Traité critique de l'homme économique Tome 1 (Paris, Le Seuil, 2009). We have asked Gloria Origgi to review it for us.)

In one of his perfect narratives, Heinrich Von Kleist tells the sad story of two secret lovers separated and condemned to death just before the earthquake that was to destroy 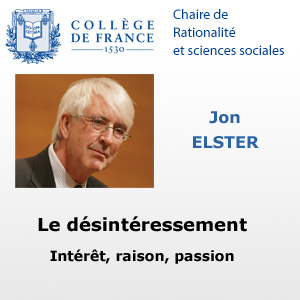 Santiago de Chile in 1647. Having miraculously survived, they enjoy for a few days the mercy of an enchanted social atmosphere. Their judges and executioners, transformed by the tragedy and the ensuing chaos, multiply gestures of altruism and generosity. The blissful mood persists for a short while, but soon the rules and norms of civil life are being reinstated and a Mass is celebrated during which the crime of the two poor lovers is denounced as the cause of all the evil. The lovers, unable to escape the fury of collective condemnation, are clubbed to death. The reciprocal altruism and the disinterested society that the cataclysm had spawned turns out to be ephemeral, unnatural, as if the ferocious end were a way to compensate for the uncanny sense of self that the people had experienced when acting in such a disinterested manner.

Jon Elster's latest book (Le désintéressement, Paris, Seuil, 2009, 377 pp.), based on his Collège de France lectures in 2006-2007, discusses the very possibility of disinterested action. Is it possible for a human being to act in a truly disinterested manner? Do disinterested actions have a psychological unity or are they the mere product of circumstances? Is disinterestedness an individual or a collective phenomenon?

From a strictly rational point of view, that of utilitarian economic rationality, to the critique of which Elster had devoted an important part of his work, disinterestedness looks irrational. It violates the rules of maximisation of utility. As if human action without the kind of rational and interested motivation that optimise the individual utility was bereft of justification, irrational or at least a-rational. Elster's aim, in this first volume of a trilogy that will be dedicated to the critique of the classical theory of Homo Oeconomicus, is precisely to combine a critique of the motivational model of interest with a methodological individualistic approach, and not to go along with holistic explanations in terms of superstructure characteristic of other social science traditions such as Marxism and structuralism. Pierre Bourdieu for instance reduces the possibility of disinterested action to the social mechanics of distinction, assuming that it only occurs as a means of increasing one's symbolic capital in an economy where not all exchanges are material. Elster, on the contrary, seeks individual motivations for disinterested acts, disinterested reasons to act that are moreover independent of the social superstructure

So Elster, equally familiar with French XVIIth century moralists and with current experimental research in behavioural economics, gives up on a univocal explanation and sketches a taxonomy of disinterested motivations that are, all the same, rational. Altruistic and disinterested action is typically suspected of, in fact, having other motivation: self-pride, desire for the approval of others, awareness of the benefits of a good reputation. To these essentially ‘allocentric' social motivations that could be reduced to a form of indirect egoism, Elster adds motivations that are not egoistic but that may be ‘egocentric', for instance, 1) disinterested consideration for others' welfare (altruism, egalitarianism, everyday Kantianism), and 2) internal approval of disinterestedness, that is, the desire we have to appear in our own eyes, rather than in the eyes of others, as motivated by disinterested consideration of the interest of others. For Elster, these motivations are independent of the mechanisms of social recognition and intrinsically disinterested.

A series of case studies complements conceptual analysis: the mechanisms of disinterest are being brought to light in behavioural economics experiments on cooperation and reciprocity and people are shown not to maximize their own utility in exchanges, in intergenerational donations, in reparation among countries, in decision processes in assemblies, and in the motivation of kamikaze terrorists, all cases that Elster had analysed in previous work.

The width of the array of phenomena analysed and of explanations is typical of Elster's style, who, to reductionist social sciences that aim at being "exact", opposes a model of vectorial explanation that proceeds by articulating a variety of causal mechanisms. There remains a doubt regarding the unity of the phenomenon: if so many forms of disinterestedness are possible, and so many different motivations may underlie it, are we still talking about one and the same thing? Is there then a unitary theory, a mechanism that explains in an integrated way this "ivresse du désintéressement," and that provides the phenomenology of this ecstatic freedom from our egoistic drives, that Kleist illustrated so clearly with a few strokes?

No more posts
Why is misinformation so sticky?
Gloria Origgi