Conversation with Jack Goody was never dull. He combined an endless curiosity for ethnographic details with a deep interest in broad anthropological questions. Here is a picture of some of his books (both English originals and French translations) on my shelves, illustrating the variety of his interests. I hope Jack would have enjoyed this post, but it is not related to his work. Notice a peculiar ethnographic detail in the picture? (I would not have paid much attention to it, except as a source of mild annoyance, if it were not for an article in today’s French edition of Slate). The titles in English read from top to bottom, those in French from bottom to top. 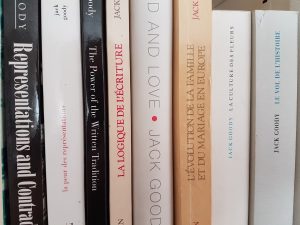 There are, it turns out, different national traditions in this respect. According to Wikipedia (“bookbinding”), “in the United States, the Commonwealth, Scandinavia and for books in Dutch, titles are usually written top-to-bottom on the spine….In most of continental Europe and Latin America, titles are conventionally printed bottom-to-top on the spine.” 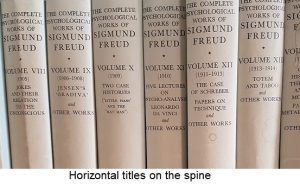 This looks like a good example of a convention in the classical sense: a pattern of behaviour (like driving on the right, or on the left) that is preferable not because of some intrinsic advantage, but because it is already adopted by most people in the relevant community.

Still why not have titles on the spine be displayed horizontally, as they used to be? Presumably, with more and more thin books (because of thinner paper and covers, and with a increasing demand for short texts), printing titles horizontally on the spine became impractical.

Printing titles sideways, then, could be done either top-to-bottom or bottom-to-top, with no obvious reason to prefer one tilt to the other. Experimental evidence (here) seems to show that readability is the same either way. So, if you are a new publisher entering a given book market, and if publishers already on the market have opted for one possible orientation rather than the other, you had better follow their example. Otherwise, to read the titles of your books scattered among books from other publishers on the shelves of their bookstore, potential customers would have to change the tilt of their head and might not bother to do so.

True, when a book is put flat with the front cover up, a bottom-to-top spine title is now upside down, whereas a top-to-bottom title is now upright and perfectly readable. But are customers more likely to buy a book because its spine title will be easier to read when the book is flat on its back (on the proverbial coffee table)? Not very likely. And if customers have no special preference for books with top-to-bottom titles, why should French publishers break with the bottom-to-top convention?

And yet some publishers in France, Grasset, Les Arènes, Economica, publish more and more books with top-to-bottom spine titles. Why? Well, the market has changed. Publishers get more and more of their income from best-sellers, which customers buy not from shelves but from tables where best-sellers are displayed in stacks. The stacked spine titles contribute to the effectiveness of such displays. This is what, in Cultural Attraction Theory (CAT), we would call an ecological factor of attraction. Will this factor tilt the current convention from bottom-to-top to top-to-bottom titling? It is not unconceivable. On the other hand, if the share of electronic books increases, or if people stop visiting bookstores and buy printed copies online, then bottom-to-top may remain as French as the baguette.

How not to combine ethnography and experiments in the study of moral judgment
Do apes produce metonymies?
Dan Sperber's blog
Easy pieces on hard issues.