Cecilia Heyes on the social tuning of reason 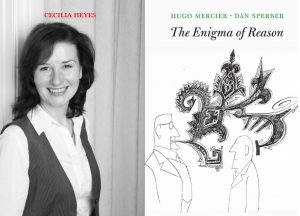 How are evolution, cognition, and culture interconnected? Cecilia Heyes and I are both interdisciplinary scholars trying to help address this basic issue but we go about it in generally different and often conflicting ways. Heyes has been a forceful critic of the Evolutionary Psychology approach defended by Cosmides, Tooby, Pinker­­ and others (see here for instance). Much of my work, on the other hand, draws on Evolutionary Psychology and aims at contributing to it. So, when I saw that The Enigma of Reason, the book Hugo Mercier, a fellow evolutionary psychologist, and I have recently published, had been reviewed in the Times Literary Supplement by Heyes, I braced myself for smart critical comments. I was wrong. Hers is a positive, very generous, open-minded, insightful review (for which Hugo and I are very grateful).

I particularly like the way Heyes encapsulates our central claim that reason is a social competence: “reasoning, like sex, works better,” she writes, “when another person is involved.”

Heyes however doesn’t fully accept our evolutionary account of the social function of reason:

In The Enigma of Reason, we evoked but didn’t discuss in detail the way the socio-cultural environment may tune the social production and evaluation of arguments (and Heyes makes further interesting suggestions on this). We would agree with her that such tuning plays a significant role and must be studied in order to get a comprehensive account of reasoning practices across cultures (something we advocate but don’t do in the book). Rather than an alternative to our evolutionary account of reason, we see this as a straightforward extension of it.

Do apes produce metonymies?
We may be thinking about it all wrong
Dan Sperber's blog
Easy pieces on hard issues.