Launching the Color Game was a shot in the dark. Who would hear about it? Who would play it? Would they like it enough to go on playing? Two weeks after the public launch, the Color Game’s reach went beyond our expectations. Color-Gamers are becoming more numerous every day, and their origins are surprisingly diverse.

How many are you?

There are many ways one can count an app’s users. Here I’ll focus on those who actually completed the install *and* the tutorial. I’m not using either Google Play or Apple’s data, since each of them misses some players, and some players found the app through other channels. As of today (28th of May), 1880 players have installed the app and completed the tutorial. 700 are “proficient” players: they have won enough points to move beyond Level 1.

Almost everywhere! The map below shows the number of players for each nationality (as reported by the players themselves when they open the app for the first time). The map was made with the rworldmap package, which doesn’t allow me to map separately the following nationalities: Kurdish, Palestinian, Native Americans, Catalan, Welsh, Scottish. The Color Game also attracted many players from the nations of the Russian Federation: Kabardians, Osetians, Kashubians, Yakuts, Udmurts, Tatars, Buryats, Caucasian Avars, Chechens. This suggests an impressive linguistic diversity which is precious for a communication game like ours — and will be the topic of another post. 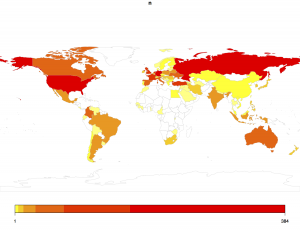 A map of Color Game players (according to their reported nationality).

Seven players have reached the game’s top level: three from the USA, two from the Netherlands, one from the Russian Federation, and one from the Czech Republic. Congratulations to them!

Introducing the Color Game
Frequently Asked Questions
The Color Game's blog
The posts on this blog explore the digital life of the Color Game, a gaming app launched by our lab. Our goal: documenting the evolution of a new language without words, and recording its birth in data. To find out more, visit colorgame.net.