Written by Helena Miton on 7 October 2017

What it took for break-up songs to become cultural items 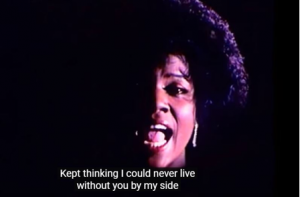 Some of the skills you develop as a PhD student were not on the program. Now two years into my PhD, I realize that I have become much better at composing nice playlists, and in particular break-up songs playlists. Admittedly, this is not what I thought I’d get good at, but, well, it still counts as a skill or knowledge of some sort, and I enjoy my newly-won status of information-provider. After years been given advice about music by others, ending up in the position of the adviser feels like an achievement.

Keeping on with the idea that any cultural item can serve as a useful toy model of some sort, I’ll suggest here that break-up songs may help us think about interdependence among cultural items. I will also argue that such interdependence can be used as a criterion for cumulative cultural evolution, in a way that is especially useful for defining “cumulative” for the aspect of culture that, unlike technology, evolve without becoming “better” in any clear sense.

First things first, let’s define the object under investigation: break-up (and post-break-up) songs. Interestingly enough, although there are dozens of pages of playlists of them, this ‘genre’ doesn’t seem to have been defined anywhere as such. Break-up and post-break-up songs may have a sad or more energetic mood; they do not conform to any one given musical genre. What binds them in one category is the tenor of their lyrics, focused on romantic disappointments, people’s lives taking different paths, or someone overcoming the pain caused by a break-up.

Here are a couple of prototypical examples. To begin with, the most famous break-up song: I will survive by Gloria Gaylor. It begins:

At first, I was afraid, I was petrified
Kept thinking, I could never live without you by my side
But then I spent so many nights thinking, how you did me wrong
And I grew strong and I learned how to get along.

Or take the lyrics of Mittens by Frank Turner:

Cause I once wrote you love songs
You never fell in love
We used to fit like mittens, but never like gloves
You left me feeling like
We’d never really been in love

The very existence of such break-up songs (as that of pretty much anything in modern life) is contingent on many other cultural items. These other items belong to a large range of domains, technical, artistic, normative… Here is a quick, non-exhaustive list, in two parts.

1. The first set of things required by breakup songs is directly related to music. Breakup songs — I assume on common grounds but with limited hard evidence — are more often listened to on one’s own than in live music settings, which makes them dependent on recorded music being available. Recorded music itself has a rather interesting rich set of dependencies. Even a quick look at the dedicated Wikipedia page  shows how cumulative and complex the history of sound recording has been.

Sound recording richly illustrates the impact of physical constraints on cultural items. One of my favorite examples is provided by gated reverbs, a specific resonating effect (If you don’t know what I am talking about, watch this – the whole Vox series in definitely worth the watch).

For the production and distribution of such songs to be profitable, the market had to be large enough, which implies that means of playing recorded music in private settings had to be widely available. This didn’t happen until fairly recently — the walkman’s success, for instance, occurred in the late 70s. If I’m right in thinking that listening to such songs is mostly enjoyed in private, we may predict that break-up songs’ frequency significantly increased after the introduction of walkmans.

Breakup songs, I suggested, are defined by the theme of their lyrics. In other words,  they belong to vocal music with intelligible lyrics. This too is a quite specific feature, not shared by all types of vocal music (the lyrics of ‘growled’ songs, for example, are hardly intelligible), let alone by all types of music. For the content of break-up song lyrics to be intelligible and hence enjoyable, the quality of music recordings had to be good enough, which was not the case with the low acoustic resolution of early recording techniques.

2. The second main set of items necessary to have break-up songs are social norms and institutions (not easy topics for cultural evolution). To make it short, as trivial as it sounds, you need break-ups in order to get break-up songs. For break-ups to be “a thing” about which you might want to sing or listen to songs, “being together” and breaking-up must be quasi institutional occurrences, and having and expressing romantic feelings must be normatively valued. Break-ups wouldn’t be material for songs if the choice of romantic partner were not somewhat free, meaning both that people are free to choose their partners, and also free to dissolve romantic relationships. Such dissolutions should also happen often enough to become ‘lyrics materials’. (Of course, as argued by Boyer & Petersen 2012, the norms and institutions involved ultimately depend on humans’ evolved dispositions for pair-bonding.)

Are break-up songs an example of cumulative cultural evolution? Yes if you use an interdependence criterion to define “cumulative.”

While cumulative cultural evolution is a major topic in the field of cultural evolution, most of its study revolves around technical traditions, and thus often equates cumulative effect with increase in performance or functionality. Such a criterion, however, is of little help with non-functional cultural items as, for instance, break-up songs.

Complexity is another frequently used metric, and to some extent is related to the one I want to suggest here. In contrast to performance or functionality, complexity can be applied to a larger range of cultural traits, and can accommodate both functional and non-functional cases (and has been, through a variety of studies ranging from toolkits inventories, e.g., Collared et al. 2005, to folktales, Acerbi et al. 2017).

With such an interdependence criterion, a novel cultural item is a case of cumulative cultural evolution as long as its existence depends on the existence of other cultural items. By such a criterion, break-up songs are an example of cumulative cultural evolution: they could only evolve given (among any more traits) the previous evolution of new music recording techniques and of norms encouraging free and defeasible choice of romantic partners.

As a bonus to end this post, several other break-up songs: We’re breaking up by Against me! , Telltale signs, by Frank Turner, So What by Pink, I know it’s over by the Smiths, Lost cause by Beck , or a personal favorite: I would hate you if I could by Turnover