Written by Victoria Fomina on 2 March 2018

How Can a Painting Make One Lose One’s Faith?

In 1867, the deeply religious Fyodor Dostoyevsky visited the Basel Art Museum and saw for the first time the original of Hans Holbein’s painting The Body of the Dead Christ in the Tomb. His wife later reported in her memoirs that the painting had such a powerful emotional effect on the writer that, in violation of the museum’s rules, he stepped on a chair to take a closer look. His face turned white, she recalled, and she had to drag him away from the painting fearing he would have an epileptic fit.  “Such a picture might make one lose one’s faith,” Dostoyevsky later told her.

The writer’s strong reaction to the image appears paradoxical: Christian Orthodox tradition, of which Dostoyevsky was a follower, does not deny Christ’s human nature or the fact of his death on the cross. After all, Christ’s sacrifice and his subsequent resurrection are the cornerstone of the Orthodox theology of salvation. Why would then an overly naturalistic depiction of the dead body of the Savior, marked by the early signs of decay, challenge an Orthodox believer’s faith in the resurrection of Christ? The answer, I suggest, lies in naturalistic imagery’s capacity to make intuitive biological knowledge which contradicts the doctrinal belief in the possibility of resurrection more salient.

The Body of the Dead Christ in the Tomb by Hans Holbein the Younger, 1520–22

Anthropological and cognitive research on the acquisition of supernatural concepts shows that the latter do not displace basic biological and physical knowledge, but rather expand it, as it is only in specific contexts that religious concepts are deployed (Astuti 2011; Barrett 1999; Boyer 1994; Evans-Pritchard 1976). In contrast to the folk understandings of physics and biology that are easily evoked, certain religious concepts take time to master and thinking with them can sometimes require a continued effort on behalf of a believer who must temporarily suspend her intuitive knowledge of reality (Luhrmann 2012). As Justin Barrett (1999) demonstrates, people’s theological concepts are subject to cognitive constraints and often vulnerable to distortion by resurfacing intuitive knowledge that is projected on them. While Barrett focuses on the role the cognitive demandingness of a task (attention overload, a need to provide a quick reply etc.) can play in disrupting the process of making inferences with religious concepts, I suggest that certain visual cues and the sensory evidence they provide can similarly have such a disruptive effect. Dostoyevsky’s unnerving reaction to Holbein’s painting presents one example of such a process.

The apophatic ethos of the Orthodox tradition postulates the impossibility of cognizing or understanding the holy mysteries and encourages believers to instead “experience” the divine with their hearts through private prayers and participation in rituals (Naumescu 2018). Icons in the Orthodox context are conceived as sacral objects that are meant to serve as mediums for the transcendent world which through their materiality help believers to experience direct contact with the divine (Herzfeld 1990). Orthodox (Byzantine) iconography does not aim to depict historical events with any degree of detail and accuracy, but seeks to transcend time and space and convey the meaning of the event. In this context, historical details and naturalism in the depiction of Christ or saints are thought of as redundant elements that would bring the believers’ minds back to the earthly world instead of helping them elevate to the spiritual one. 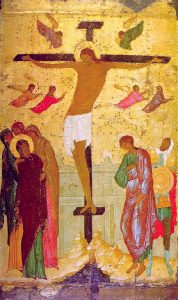 The Byzantine canon of depicting the scene of the crucifixion differs significantly from the practices of Western religious art. While Western iconography starting from the High Medieval period often portrays the suffering of Christ rather graphically, accentuating the gruesome details, Orthodox icons, which tend to focus more on the theme of triumph and resurrection, rather than suffering and death, usually present a highly abstract depiction of Christ’s body. His suffering is alluded to, but never foregrounded. This aesthetic difference, I argue, is not merely theological, but is determined by the properties of the images and the functional role they play in sustaining the two traditions.

In their analysis of the coexistence of conflicting biological and religious conceptions of death among rural residents of Madagascar, Rita Astuti and Paul Harris (2008) demonstrate how different contexts activate different types of knowledge about death. When presented with the narratives that focus on the corpse, their Madagascan informants were more likely to deploy their biological knowledge when answering questions about a deceased’s capacity to feel or think. In contrast, when primed with a ritualistic context of the ancestral practices associated with the afterlife, the respondents resorted to their religious conceptions and insisted on the continuity of mental processes after death. Building on this insight, I suggest that the different iconographic styles can function as visual primers that appeal to the different conceptions of death in believers.

The graphic portrayal of suffering and death in the context of Western Christianity engages the audience’s biological conception of death and its embodied knowledge, as it seeks to elicit a strong emotional response and invites the believers to ponder the greatness of Christ’s sacrifice and to participate in the Biblical drama through co-suffering with him (Carlson 2010). The visual mediation of the gruesome corporeal reality of death also aims to remind believers of their mortality, making them more aware of the imminent decay of the flesh, and instilling them with a fear of final judgement to deter them from engaging in sinful practices.

A more other-worldly directed Orthodox tradition, by contrast, encourages the believers to cultivate spirituality through detaching from material reality and directing their minds to the divine. Orthodox tradition does not require its practitioners to meditate on or try to vicariously experience the corporeal horrors of Christ’s passion. Even with the spread of the Western iconographic influences in Russia and several other Orthodox countries starting from the 17th century onwards, Orthodox icons of Crucifixion and Deposition of Christ still focused on conveying the beauty of Christ, rather than portraying the tragedy of his death. Orthodox tradition presents the concept of Christ’s death as a paradox (i.e. a divine eternal God cannot die) – a mystery that believers are asked to accept as such. The acceptance of the mystery of death and resurrection requires believers to suspend their biological knowledge and turn instead to a learnt religious conception. Byzantine iconography, which directs attention to the transcendent world and conveys the essence of Christ and the saints, rather than their physical form, provides crucial visual support for the exercise. It is in this context, that a naturalistic painting’s capacity to induce a momentary crisis of faith in an Orthodox person needs to be understood.

Dostoyevsky never wrote anything on Holbein’s painting in his personal notes. However, he did return to the morbid impression the image left on him in his novel The Idiot, in which one of his characters, Ippolit, makes the following comment on the painting:

It is strange to look on this dreadful picture of the mangled corpse of the Savior, and to put this question to oneself: ‘Supposing that the disciples, the future apostles, the women who had followed Him and stood by the cross, all of whom believed in and worshipped Him— supposing that they saw this tortured body, this face so mangled and bleeding and bruised (and they MUST have so seen it)—how could they have gazed upon the dreadful sight and yet have believed that He would rise again?’ The thought steps in, whether one likes it or no, that death is so terrible and so powerful, that even He … was unable to triumph over it at the last (p. 750).

The question posed by Ippolit (and which may have haunted Dostoyevsky himself), nicely illustrates the tension between the intuitive biological knowledge inevitably triggered by the sight of a naturalistically depicted corpse and doctrinal beliefs in the miracle of resurrection. This episode, even if fictional, speaks to the importance of visual mediums in the transmission of religious concepts. It also points to the potential challenge naturalistic imagery poses to Orthodox modes of belief.  Deeply dependent on the mediating role of icons for enabling a direct contact with the holy figures, the transmission of Orthodox spirituality also relies on a specific mode of representing the mystical world.

The differences between iconographic traditions certainly should not be reified, as historically there has been a significant amount of variation in style and canon within them (Belting 1994). Neither should the challenge naturalistic depiction of death might pose to one’s faith be overstated. Christianity presents a complex system of beliefs and propositions and while naturalistic imagery can challenge some of them, it can also make others more salient. In fact, it can have both a disruptive and an affirmative effect on religious conviction, depending on the type of spirituality one is trying to cultivate. Although a naturalistic depiction of Christ’s dead body might not to be a suitable visual medium for transmitting beliefs about resurrection, it can play a reaffirming role in the mode of religiosity that focuses on Christ’s suffering and death as evidence of God’s boundless love for humanity. Whether exposure to different types of imagery can indeed cause substantial changes in believers’ religious sensibilities and their ways of understanding divine mysteries and relating to them, is an interesting empirical question that has yet to be pursued.

Astuti, Rita and Harris, Paul. 2008. “Understanding Mortality and the Life of the Ancestors in Rural Madagascar.” Cognitive Science 32: 713-740.

Astuti, Rita. 2011. “Death, Ancestors and The Living Dead: Learning Without Teaching in Madagascar.” Pp. 1-18 in Children’s Understanding of Death: From Biological to

Belting, Hans. 1994. Likeness and Presence: A history of Image Before the Era of Art. Chicago and London: University of Chicago Press.

No more posts
Reasoning against Faith: When Clerics Intervene in Popular Religion
Victoria Fomina's blog
Some reflections on cognitive and social processes in the making of religious traditions.