Neurotheology as an American Myth 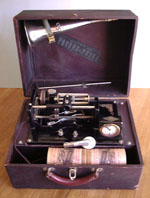 According to Schmidt, neurotheology is just one manifestation of a deep trend in American thought. American spirituality, he claims, always loved to explore the interface between technology and religion, and more broadly, emphasized the psychological aspects of religious experience, at the expense of the insitutional or ritual. This attitude may have paved the way for cognitive science and fMRI studies of religion – what some call the "Holy Mix".

Technology was regularly seen as a conduit of empirical proof for divine realities. Was not the telegraph, for example, a herald of spiritualist communication? The Society of Psychical Research, on both sides of the Atlantic, was enamored with the notion that the new auditory technologies could well yield spiritual dividends. When the telephone appeared on the scene, some in the SPR threw themselves behind a new contraption called the “psychophone” through which the inventors claimed to be hearing the voices of angels. The psychophone no doubt sounds absurd, but I can’t say that it sounds much more far-fetched than a transcranial magnetic stimulator. Both demonstrate the enduring cultural impulse toward techno-theologizing. However much neuroscientists might want to forswear an interest in the metaphysics of their brain-scanning technology, it is clear that such brain-imaging techniques are inevitably framed by precisely those kinds of religious and cultural debates: is MRI brain imaging finally a technology that reveals absence or one that reveals presence? Is it a mechanism that shows religion to be fully reducible to and determined by biological materiality or is it one that ultimately reveals the God-spot, the hard-wiring of divine-human encounter? Asking those kinds of techno-theological questions has been a recurrent cultural theme since the Enlightenment.

I'd agree with Smith that most fMRI studies of religion owe their appeal to this persisting interest for techno-theology. But I doubt it is typically American… after all, the Society for Psychical Research was established in London – it still is, and one of his famous members was French philosopher Henri Bergson, a friend of William James (former president of the SPR) who  shared his taste for the introspective psychology of religion. Come to think of it, lots of studies in neurotheology come from France (see this one for example).

Post-scriptum: I was astounded to find that psychophones are still on sale (photo)… You may by one here for no more than 5 000 dollars (ouch!).

The color of dreams
The debate over maths in the Amazon: still counting points
Olivier Morin's blog
Cognition. Culture. Things in between.