Written by Olivier Morin on 2 September 2016

Biological Reviews publishes a 25-authors paper lead by Simon Townsend and titled “Exorcising Grice’s ghost: an empirical approach to studying intentional communication in animals.” I was quite amazed to find such a huge number of authors coming together from different horizons, and agreeing to sign such a provocative paper. Post-workshop, co-authored contributions like this one tend to be bland; that certainly can’t be said here. Add to this the exceptional stature of the contributors, and the result is a fascinating paper.

On the face of it, the authors have nothing against Grice’s legacy, per se. They’re simply trying to get his ghost out of the methodology section of ethology papers. (He might creep back into the Discussion section—fine. That’s what ghosts tend to do.) Put this way, that’s surely a laudable goal—but the detail of the discussions leave an altogether different impression—the impression that the authors want to make a ghost of Grice, even where his ideas on human communication are concerned.

When explaining, for instance, that metarepresentations are difficult for young children and effortful for adults, the authors choose to ignore the side of the controversy that argues exactly the opposite. Young children have been claimed to compute others’ perspectives automatically, to pass implicit versions of the false belief task, to master truth-functional negation. The standard false belief task has been thoroughly critiqued as a yardstick of metarepresentational capacities. All of this is debated, of course, but opting so clearly against one side of the debate is not exactly the theory-neutral move we’d been lead to expect. Likewise, the view that human communication aims at affecting other people’s mental states is dismissed because it “has been challenged (Moore 2015).” (Questioned by Richard Moore = forever tarnished by doubt?)

Then there are the loopholes left open by the paper’s definition of communication. As I understand it, it is sufficient that an animal acts voluntarily with a certain goal, by means of producing a signal that will change another animal’s behaviour in a way that suits that goal. At this point, we expect the authors to provide a definition of what counts as a signal; but none really comes forth. Instead, we’re told that signals must be produced voluntarily in a way that pays attention to whether the audience is paying attention. Which sounds suspiciously meta-representational—but that’s not the main worry. The main worry is that if we go by this definition, we should be calling communication a series of behaviours that aren’t usually called that, and for good reasons.

I am fly fishing. I drop some bait in the water to attract graylings. The graylings come. Only now do I set my lure flying. One of them bites! Communication? 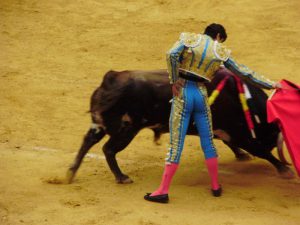 A pass by Miguel Angel Perera. Would you call this communication between man and animal?

The torero waits until he has the bull in his sight. He then produces the red muleta from behind his back. Now he definitely has the bull’s attention. He waves the muleta. As intended… the bull charges! Communication?

If we apply the paper’s “new framework” to the letter, then the answer has to be Yes, both times. A voluntary behaviour is produced, with the intention of inducing another animal to perform another behaviour, by means of a signal that is voluntarily produced (if and when the audience is in the right state to process it). On the other hand, though, counting these episodes as communicative obscures an important distinction between manipulation and communication (as theorised by John Maynard-Smith and David Harper). There is nothing in the bull’s brain that evolved to be affected by muletas; nothing in the grayling’s brain that increased the graylings’ fitness by following lures. Quite the opposite: both would fare better if they paid no heed to human traps. Yet there is arguably something in your brain and in mine that did evolve to be receptive to human words.

Is there really? And if there is, what might this communicative capacity look like? The Gricean perspective has answers to all these questions that the new, theory-neutral perspective ignores (so far). Something tells me Paul Grice’s chains will still be heard clunking in the corridors of animal communication labs a few years from now.