In these times of financial and social crisis, the French government is at work. On January the 12th, an interministerial commission will be gathered in Matignon by French Prime Minister François Fillon, and presided by his assistant Jean de Boishue, a man known for his controversial positions and action concerning France’s rioting youth. The reunion will most probably grant a wish that has been in the PM’s mind since at least 1996: offer his electors of La Flèche, a well-to-do, sleepy town in Western France, the skull of René Descartes.

Everyone remembers Descartes as the most vocal supporter of a radical distinction between body and soul, commonly called dualism. Dualism is held by psychologist Paul Bloom (as it was held by Descartes) to be a natural and innate feature of our thinking about the human mind. On this blog, Paulo Sousa and Mitch Hodge have questioned whether humans are really intuitive dualists, after all. Well, even if they are, Bloom and others should find a way to reconcile their thesis with Fillon’s eager pursuit of a skull thought to belong to the man who thought it had nothing whatsoever to do with the content of his mind…

Given his doctrine, there is some irony in the fact that Descartes’ bones play center stage in one of the best corpse stories ever heard in the days before Eva Perón’s mummy [1]. As Guillemette Faure, who covers the case for Rue 89 [2], found out, dualism was somewhat lost on Cartesians – as far as Descartes’ remains were concerned. Descartes-fetishism was a common practice among them ever since the Master died in Stockholm in 1650.

“In 1666, the chevalier de Terlon, in charge of negotiating the exhumation and transportation of the body [with the Swedes], took a finger from it, “instrument of the defunct’s immortal writings”. Alexandre Lenoir, asked to recover Descartes’ body for a museum of French monuments, scavenged a flat bone, from which he sculpted rings that he offered his friends. The skull of the Musée de l’Homme is engraved with the names of a dozen former owners, who apparently thought genius could be caught by contact”

As a result, Descartes’ remains are scattered all over Europe, with up to five collections claiming to possess Descartes’ skull. Fillon’s team are waving questions of authenticity aside, but many experts doubt that the skull enclosed in a safecase in a basement of the Musée de l’Homme, once exposed in a Stockholm tavern, then bought for half the price of a bottle of aquavit by a chemist who sent it to his friend Georges Cuvier, is genuine.

What remains of the identified body, except for the skull and other bits and pieces detailed above, is interred in a Paris chapel – and the usual policy in such cases is to return the skull to its body. La Flèche’s only claim to the skull is Descartes’ eight-years stay at the local Prytanée, a Jesuit high-school quite renowned at the time, which he loathed. So why is François Fillon so eager to return this dubious skull to a small town ? And why now? A powerful figure in the French government since 2002, Fillon, once minister of education and research, has had many opportunities to fuflfill his promise to La Flèche. But something happened in 2007 to the Musée de l’Homme skull – something that might have rekindled the PM’s interest in Descartes’ bones.

The philosopher, the caveman and the footballer

The Musée de l’Homme, which used to be France’s number one anthropological institution, has been hosting a permanent exhibit on human diversity for over a decade. “Tous parents, tous différents” (“We’re all related, we’re all different”) is a boring lecture explaining why racism is wrong, with some elements of biological anthropology thrown in. In 2007, a new attraction was added to the exhibit: Museum officials decided to ask footballer Lilian Thuram for a molding of his skull. The molding was then exposed with two other skulls, that of the famous Homo Sapiens found at Cro-Magnon, and a replica of the skull attributed to Descartes: a caveman, a philosopher and a footballer. As you may have figured out, the exhibit was devised by readers of Stephen J. Gould, and the showcase was a heavy-handed demonstration of the fundamental similarity of human skulls.

The Musée de l’Homme gathered three skulls in a somewhat clumsy attempt at illustrating the unity of mankind. From left to right: Homo Sapiens, c. 30 000 BC; a replica one of the 5 existing skulls attributed to René Descartes; a plaster model of footballer Lilian Thuram’s skull. “The 3 skulls”, the Museum’s website comments, “are perfectly similar”.

But Lilian Thuram is not any footballer – nor is he an exact representative of the average footballer’s IQ. Thuram was a member of the 1998 équipe de France, the team that won the World Cup and came to symbolize French ethnic diversity. A thoughtful and clever man, Thuram is also well-known for his left-wing political activities, and bitter criticism of the government. This makes him particularly popular among the French Left – and correspondingly unpopular with government officials, especially those working on the problem of rioting youths (Jean de Boishue being one of them). 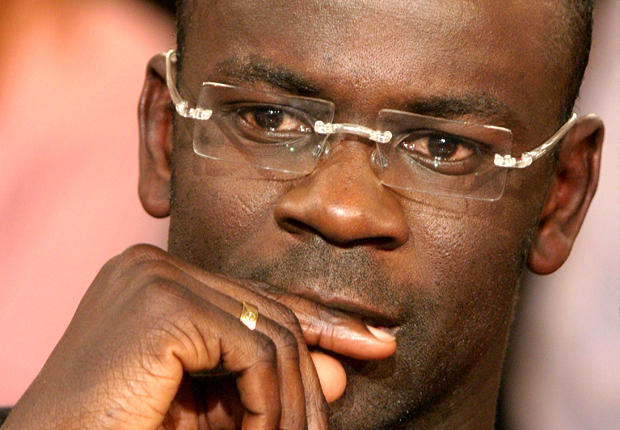 Lilian Thuram, with his flesh and skin on.

Obviously, Fillon would never dare citing the skull’s proximity with Thuram as a reason for the displacement, but in La Flèche, people talk much more freely, as Ouest-France reports. At the Prytanée, now a military high-school much valued by the local bourgeoisie, a former student and long-time activist for the return of the skull, comments:

“It is between the skull of a caveman and that of Lilian Thuram!”, he smiles. “I am not sure that’s were it belongs…”

Truth be told, this is all far-fetched speculation: I don’t know much about the motives behind the fight for Descartes’ skull. But next time I hear a philosopher or an anthropologist explain that Descartes induced a disenchantment of the body in Western mentality, or a loss of the embodied self, or whatever stories people like to tell about Cartesian influences on intuitive dualism and our relation to bodies, I will think of Fillon and La Flèche – and grin to myself.

Post Scriptum 1/12/2009: The commission eventually found that Fillon could not legally take the skull away from the Musée de l’Homme. Fillon merely asked the museum to present the skull to the public in a “more suitable” way.