Where good ideas come from 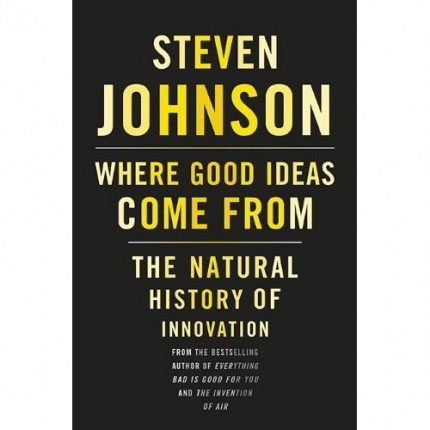 Following up on the news of a few days earlier about the role of different network structures in the spread of new ideas, it's worth mentioning the new Steven Johnson book on a related topic: Where good ideas come from. Johnson sets out to dispel the myth of the lone inventor whose main motivation would be the financial benefits derived from her creativity. Instead, he suggests that most inventions are the result of a kind of undirected cooperation — not a group of people purposively pursuing an idea, but several groups working on slightly different things that add up to a significant discovery in the end. Moreover, profit seems to be a motive only in a minority of case, despite the 'progress' made in copyright and patent law over the course of the 20th century.

Where good ideas come from is quite different from the two previous books in Johnson's informal series about creativity. These two books — The ghost map, about the discovery of the cause of cholera, and The invention of air, about Priestley's discovery of oxygen — were at heart narratives centered around one character. Even though broader ideas played an important role in both books, they were still in the background, lessons to be learned from a vividly described story. By contrast, Where good ideas come from describes various factors that foster the apparition of good ideas — from 'liquid' networks to platforms that allow people to build on them — drawing from many examples described in a few pages at most.

In the final chapter, Johnson tries to go beyond the narrative of each and every invention to draw more general lessons. In particular he argues that most inventions nowadays can be categorized as a 'non-market / network' type: they were not invented mostly for money, and they relied on the cooperation of different groups whose main aim may not have been the completion of the final 'product'. Even though Johnson is very likely to be on to something, this book may be slightly less enjoyable — less gripping certainly — than the other two. Maybe it's the absence of a narrative, or of endearing characters. It's also possible that Johnson's argument remains a bit unpersuasive for readers used to a more 'academic' style — how did he select the inventions? how did he categorize them?

In any case, let's hope the book convinces more people that something should be done about our current patent and copyright law, and that ideas should be as free as possible to circulate — as very eloquently argued by Larry Lessig, for instance in this TED talk.