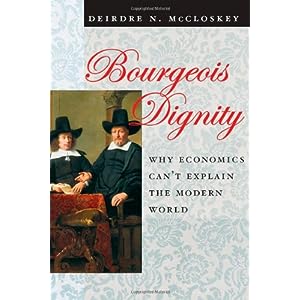 Deirdre McCloskey is a very unorthodox economist. Even though she did a lot of classical work on the history of the industrial revolution in England, she is best known for her critical examination of the 'rhetoric' of economics. A good example of her attacks can be found in her latest book on that issue (The Cult of Statistical Significance, with Stephen Ziliak), in which she criticizes the slippery use of 'significance' in statistics (see this post). But McCloskey has now engaged in an even larger enterprise: explaining the unprecedented economic growth observed over the last two centuries. The ambition of the project is reflected in the sheer volume of the treatment: six books, one published in 2006 (The Bourgeois Virtues), one that just came out (Bourgeois Dignity – that is briefly reviewed here), one available in draft form (The Bourgeois Revaluation), and three more that should appear over the next few years. McCloskey's main these is that the period of growth we have experienced was due to a shift in the rhetoric about bourgeois values.

After having been frowned upon – think of the scorn for the merchant in Shakespeare – the bourgeois values started to be honored, and more liberty was given to the entrepreneurial, or innovative, actors in society – first in Holland in the 17th century and then in England in the 18th. This is a fascinating idea, well outside the mainstream of explanations usually advanced by economists and historian to account for the industrial revolution. In Bourgeois Dignity, McCloskey does not present much by way of positive arguments – this will be done in the next two books. Instead, she relies on a negative argument: none of the other explanations work, so mine must be correct. She defends this strategy at the beginning of the book, mentioning successful instances of its use, such as the elimination of all other hypotheses by Penzias and Wilson in order to conclude that the white noise they recorded was in fact a product of the Big Bang. However, it is much less clear in the case at hand that all other hypotheses have been exhausted. To some extent, the very fact that she's able to offer a novel explanation herself shows that it's still possible to do so, unless she assumes that anybody else but her can do it.

Even if her negative argument offers little support for her own thesis, it is still immensely useful in its refutation of many common ideas about the cause of the industrial revolution. The titles of her chapters provide us with a quick list of unsatisfactory explanations. It was not accumulation, nor improvements in transportation or in trade, nor geography, nor imperialism, nor institutions, and so on and so forth. As non-expert, it's hard to judge whether all of her dismissals are equally sound, but her arguments are usually strong, relying on recent historical statistics (against the economists' hypotheses) or well-accepted economic arguments (against the historians' hypotheses). Even if each rebuttal were to be sound however, they would still offer only limited support for her own thesis. Many of the arguments are of the form: "this explanation relies on this factor, but this factor was also present in other times / places, and so it cannot successfully explain the specific event that happened in England in the early 19th century." This still leaves open the possibility of interactions. Maybe it was not only trade, or geography, or institutions, but the interaction of these different factors that was unique of this time and place. While such an argument remains to be made, it shows that the exhaustion of current alternatives offers only limited support for McCloskey's own point.

In any case, McCloskey's thesis promises to open doors for an approach to the problem that would take "cultural epidemiology" into account. Even though she's careful to talk of 'rhetoric', focusing on what people say rather than what they may think, the question is still fundamentally one of spread of cultural elements – here, beliefs about the bourgeois virtues and beliefs about what is appropriate to say about them. Why did these beliefs spread at that particular time and place? If they are really responsible for our modern wealth, why did they not spread before? Hopefully, McCloskey will address these questions in more depth in the future installments of her series. Unfortunately, she seems to have nothing but scorn for (and apparently little understanding of) psychology, in particular any kind of psychology inspired by the theory of evolution (she dismisses Pinker as a eugenist for suggesting that language is probably in part innate). So there is little hope that she relies on psychology to do any of the explanatory work. This is a shame since some well-established human cognitive proclivities could help explain the resistance to some of the bourgeois values. For instance, many innovations make most people better off but some people worse off. The status quo bias (a bias to prefer the status quo) and loss aversion (losses loom larger than gains of equal value) could help explain why innovations are not more commonly accepted.

McCloskey's refusal to take psychology into account also leads her to discount happiness research. Her main argument seems to be that since people do not say that they are much happier now than thirty years ago – in rich, Western countries – but that their purchasing power has increased, then the happiness research must be bunk. To account for this puzzle, she invokes the increased number of possibilities that have become open to people (Sen's capability approach), saying that this is good for people even if it doesn't show up in the answers to happiness questions. So at least she seems to agree that purchasing power is not everything that matters, or even that it may not even be the most important goal for a society. It is regrettable, then, that the increase in purchasing power is the only thing she focuses on in the book. Granted purchasing power is easier to measure, especially when it comes to, say, 18th century data. Granted also, purchasing power and increased capability are correlated. But there are also likely to be deviations from a perfect correlation. It seems as if her occasional sneer at the Swedish or the German economic models might be tempered if she took into account more than sheer purchasing power, in line with her own statements about the importance of capabilities.

Finally, the book could probably have used more editing. Five hundred and fifty pages of negative argument is a lot, and it could certainly have been made shorter. Some digressions may have been skipped – about the billiard skills of McCloskey's father or biographical details of the life of Douglas North. And some chapters may not have been entirely necessary. For instance, spending three chapters on Gregory Clark's absurd thesis that the industrial revolution was caused by English bourgeois out-reproducing the poor and thus spreading their values was probably too much. Still, the book is an invaluable review of the explanations for what may be the most important event in human history, and McCloskey's verve and breadth of knowledge shine throughout. She offers a truly unique perspective on this fascinating topic, and we should look forward to reading the next volumes.

Where good ideas come from
The spread of medical innovations
Hugo Mercier's blog
Hugo writes mainly about cognitive psychology – in particular reasoning – with the occasional foray into cultural phenomena.