After getting lost in the meanders of the Internet—well, to be fair, of Wikipedia— a grayish Sunday morning, I ended up in the Urban legends section, and may have found some ‘blogpost’ material. That’s for you to judge, here’s my Halloween special!

Several Japanese urban legends are set within the rather unusual locus of bathroom stalls. It seems to be the case of at least four of them: Hanako-San, Aka Manto, the three-legged Rika Chan, and, finally, in some versions, Teke-Teke.

First, Hanako-San is allegedly the spirit of a young World War II–era girl, haunting school bathrooms, appearing when one shouts her name (more detailed accounts of her story bear even greater resemblance with the Western Bloody Mary: knocking three times on the third bathroom stall would make her appear). Her physical appearance and course of action then depend on local variants, running from a benign young girl wearing a red skirt to a blood-stained hand.

Second ‘spirit of interest’ for us here is Aka Manto, a malicious spirit who haunts public and school toilets, and who will ask you if you want red paper or blue paper. In some versions, he will ask you if you want a red or blue cape, rather than paper. Often described as a beautiful man in life and hounded constantly by admirers, he now wears a mask to hide his face. Depending on how the question is answered, the unfortunate soul who encountered Aka Manto meets death either through being strangled until his face turns blue (if her answer was ‘blue’), or being sliced apart until her clothes are stained red (obviously, in case of ‘red’ answer).

Third, the three-legged Rika Chan doll story goes as follow: if a girl enters a toilet at her school, and finds a Licca-chan doll on the floor with a purple third leg, she will lose one of her own legs shortly after. She might then grow a purple—and not functional—leg, which will eventually take over her body, leading to a fatal outcome.

Fourth and last of our charming Japanese spirits/demons is Teke Teke, who, in some versions of her story (not in all of them), appears in bathroom stalls as well. Teke Teke is the upper half of a girl-said to have been cut in half by a train-and would therefore ask the occupant where her legs are. Incorrect answers are met by Teke Teke ripping off the unfortunate soul’s legs – and just in case you come across her, the only answer to save your legs is that hers are at the Meishin Railway.

Let us now consider another rather mundane occupation for ghosts and spirits: hitch-hiking.
While driving late at night, most of the time alone, the driver comes across a young, usually female, hitch-hiker, rather pale-looking. After driving for a while, the driver turns around, only to discover the seat previously occupied by the hitch-hiker totally empty.

I have no idea what is the true incidence of such stories, but as a teenager growing up in France, I can remember having been told, more than once, stories of ‘Dame blanche’. The so-called ‘vanishing hitch-hiker’ story gave its title to one of the classical books (Brunvand, 1981) collecting so-called urban legends. Its dedicated chapter reports more than a dozen versions of this well-known folklore item, covering a large enough range of stories to appreciate how some elements can be tailored to very local contexts. 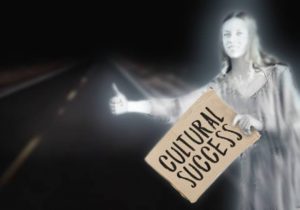 The success of such stories is hardly surprising, given that they possess their fair share of characteristics making them ‘attractive’, (gruesomeness or surprise for instance). But I’d like to pay some more attention to other specific features shared by those urban legends. So, what’s the point here?

To start with what bothered me here… Why would demonic creatures haunt bathrooms? Or ghosts hitchhike? Both look rather mundane -and, to my taste, almost disappointing- from supernatural agents who could, potentially, do more ‘interesting’ things. Were you a spirit, i.e., an agent not bound by your physical abilities, would these be the places you would like to be in or the things you would like to do?

Here is a purely speculative account for those features… I want to suggest that those elements play a role in enhancing the narrative’s plausibility. Bathroom stalls or deserted roads at night may almost come as ‘likely’ or ‘plausible’ settings: they are settings in which it is easy to justify meeting with a single character, and they also offer cases that 1) the listeners might encounter in real life, and 2) might offer some ‘real-life’ stimuli to draw on. For instance, fog on countryside at night can give evanescent impressions of having seen a human silhouette, and bathroom stalls can have their share of noises able to trigger feelings of presence.

And then, why would urban legends need any plausibility? After all, and if my experience as a teenager can be generalized, they seem to be pretty much transmitted with the awareness of their ‘non-reality’. Yet, plausibility might satisfy some types of constraints weighting on culturally transmitted narratives: ‘cognitive’, and ‘pragmatic’.

First, for the ‘cognitive’ types of constraints, it is very likely that a scary story is scary, at least partially, in virtue of being realistic, or at least plausible. In order to benefit from their gruesomeness, threat-relatedness and elicitation of fear, which would give them an advantage in terms of emotional selection and memorability, they need to reach a critical level/threshold of plausibility. Blatantly impossible or false stories don’t elicit fear as much as likely – or even worse, true! – ones do, for a given level of gruesomeness. On the other hand, some stories or news are able to trigger a much stronger emotional response with only a small fraction of urban legends’ gruesomeness – in virtue of them being really real.

But the point here might be a bit more twisted – the narratives we are focusing on are essentially transmitted in a context in which they are known to be false. The internal plausibility of the narrative would here still be necessary for it to achieve some cultural success. Without such plausibility, their other characteristics (e.g., playing on disgust, or fear) can end up ‘inefficient’: plausibility would be required to ensure the ‘cognitive’/‘emotional’ appeal of those narratives. It also illustrates how some characteristics of contents (threat/fear) require some other characteristics to be effective in cultural transmission.

The second set of constraints I’d like to suggest might be playing a role here would be of a more pragmatic nature. I would hypothesize that, for urban legends to spread, they need to be told, and for that to happen, they need to not be interrupted, or at least, not be ‘thrown away’ beforehand. Hence those stories’ settings: they avoid provoking listeners’ (receivers’) objections straight away. Starting with rather lonely and likely settings would, possibly, ensure a smooth(er) delivery than less likely or realistic ones. As such, urban legends’ settings might bear traces of the weight of pragmatics upon stories-to-be-told’s shoulders – by avoiding disruptions while they are being told. To some extent, I’d like to suggest that an unlikely setting could have the same kind of social, pragmatic effect as the ‘wrong’ kind of doubt reported by Maurice Bloch in a former post (Dan & Gyuri‘s comments on it). Somehow, this illustrates another interesting point: pragmatics also weight on and shape cultural contents.

Brunvand, J. H. (1981). The vanishing hitchhiker: American urban legends and their meanings. WW Norton & Company.
For urban legends as rumors that, after some distortion, can persist for generations:

Cow-tipping, and the strange performativity of ‘scientific studies’ - and cultural transmission
What it took for break-up songs to become cultural items
Helena Miton's blog
ICCI's cabinet de curiosités. Hodgepodge of cultural items. Be my guest!