Cow-tipping, and the strange performativity of ‘scientific studies’ – and cultural transmission

One of my all-time favorite scientific papers is the ‘Academic Urban Legends’ by Ole Bjorn Rekdal, published 2014 in the journal Social Studies of Science. Very briefly, the author goes through the story of ‘spinach containing (a lot of) iron’, and, even more interestingly, of its correction, ‘spinach does not contain that much iron – it was a typo / misplaced decimal point’. Through this paper, Rekdal manages to unveil the fact that actually, the correction is actually… as much of a myth as the original claim (i.e., spinach contains a large quantity of iron). He also traces the spread of this correction almost back to ‘patient zero’.

Another of my wanderings through the Internet made me investigate something that could almost qualify as « along those lines » – and I thought I would share it here, with some additional thoughts. This is about cow-tipping.

Cow-tipping is a ‘rural’ rather than a strictly speaking ‘urban’ legend: (preferably drunk) people, the story goes, sneak at night in cows’ pasturage, and ‘tip’ the (sleeping) cows, i.e., push them, making them fall on the side. As with a lot of urban legends, its exact spread and incidence are hard to ascertain – and not having been trained as a folklorist, I won’t attempt to do it – I essentially stumbled upon this story while wandering through Wikipedia’s pages. 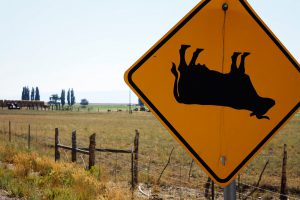 What is of interest here is not so much the practice of cow-tipping in itself (nor that of talking about cow-tipping), but rather the additional fact that, apparently, cow-tipping has been demonstrated to be something impossible by two researchers, as both the Wikipedia page and several online newspapers pages tell us (here, or here for instance). This research seems to have known two ‘peaks’ of popularity, the first one with ups and downs from 2004 to 2006, and a second one (that I can, to be fair, hardly explain) in 2013, which coincides more or less with Google Trends peaks in the frequency of “Cow tipping” as a word search (here).

But the story becomes weirder! As any good google-scholar-olic, I tried to find out the original paper demonstrating the impossibility of cow-tipping that seemed to be cited, both on the Wikipedia page and in the other sources… and I couldn’t.

I ended up emailing Dr. Margo Lilie, who is cited as the researcher who authored the study with her student. She very kindly (and quickly!) replied to my email. There has never been any ‘proper’ study or paper, the only thing produced on the topic was an end-of-the-term paper by one of her students. By ‘proper’ study or paper, I essentially mean something published in an academic, peer-reviewed, journal.

Looking closely at the wording used by the various secondary sources (journalists and Wikipedia), they don’t attend to the difference between different levels of evidence or ‘seriousness’ of publications. Since there’s no doubt that cow-tipping is indeed physically impossible, no “harm” has been done. Still, there is room to discuss whether the question remains: is the way the impossibility of cow-tipping was reported problematic, and to what extent?

What might matter here, or at least what might be interesting for us, is that the information is conveyed as ‘scientifically proved’ and ‘reliable,’ despite not having gone through the steps of peer review and academic publication. I have no idea how much the so-called ‘general public’ is sensitive to the ‘levels of evidence’ set by academic publication (and if anyone has references on that, I’ll be grateful for them), but my guess would be that – in virtue of epistemic vigilance mechanisms, this kind ‘scientifically proved,’ or ‘reliable study’ wording does enhance the content’s credibility. I would be very surprised if it turned out that a decent share of readers actually checked – or even cared – what is meant by ‘study’, and whether there is a published academic paper.

And this leads us to what I find particularly interesting: there is something almost performative about the use of words such as ‘scientific,’ ‘proved’, ‘study.’ I’m just borrowing here Wikipedia’s definition: Performativity is « the capacity of speech and communication not simply to communicate but rather to act or consummate an action, or to construct and perform an identity ». Here, the language used, as well as transmission in itself, grant some kind of epistemic authority to the ‘study’: whether or not there has actually been a scientific, peer-reviewed, paper, it is transmitted as if there had been. This arguably is a non-trivial feature of certain kinds of cultural transmission, which, to my eyes, would deserve more attention.