Written by Helga Vierich-Drever on 20 January 2018

We asked Helga Vierich to share with us as a guest blogger anthropological reflections on friendship and social networks based on her fieldwork among the Kua hunter-gatherers of the Kalahari. Helga has a PhD in anthropology from the University of Toronto, and teaches at the Yellowhead Tribal College in Alberta. 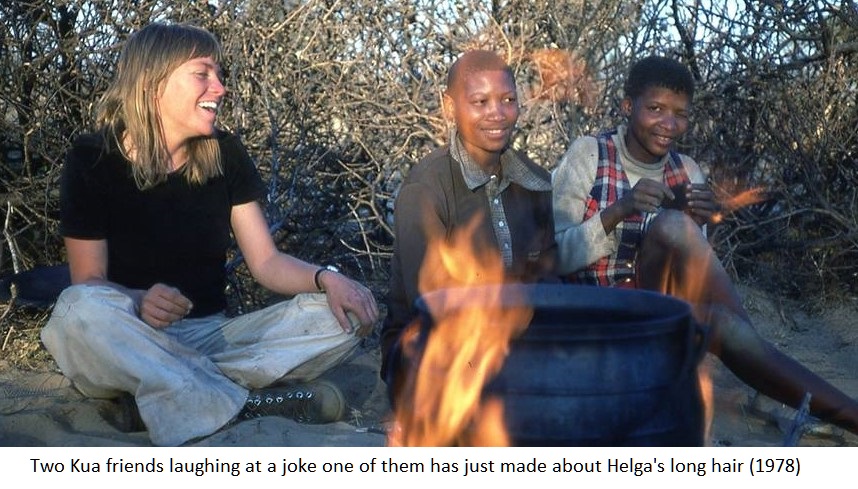 Friendship is kinship by another mother.

Why is this so important among humans?

Well, consider what I found when studying the lives of hunter-gatherers in the Kalahari. I found that all the people were living in multi-family groups – camping parties – consisting of friends – as well as of kinfolk.  Camping parties among the Kua were typical of the kinds of “groups” encountered when you go visit mobile hunter-gatherers.

Early researchers called them “bands”.  Networks of mutual support, often symbolized by exchange of gifts, and other efforts to keep in touch, form the essential social networks that constitute the basis for individual reputation, and such reputations often literally anticipate any social contact.   Even when the neighbors speak mutually unintelligible languages, as among the Kua and their neighbors the G/wi, and G//ana, it hardly mattered; many people were multilingual.

Among the Kua adults, belonging to a wider circle of valued companions, consisting of both relatives and friends, is of paramount importance. This is highly significant in terms of mate selection and reproductive success. The greater the number of network connections that were drawn together around a particular person, the greater the “relationship wealth” of that person. This was the most significant quality assessed, for example, in a prospective mate.

The size and influence, of any one individual’s position, as a hub, in a cloud of acquaintance where many networks connected, appears to reflect personal reputation. This is not necessarily determined by material wealth, but rather by evidence of trust-worthiness, generosity, and other signs of character, and these are still highly valued in almost all human communities.

Among most hunter-gatherers, it is from such a small pool of “hubs” (trusted and respected persons) that households coalesce into camping parties.  At larger aggregations, people thus connected by kinship and friendship may also assemble spontaneously into temporary task forces, often under the direction of the high-ranking elders.  These work to clear brush from campsites, gather building materials, set controlled fires, and police minor conflicts. Childhood friendships loomed very large among these hunter-gatherers.  Attachments to other children seemed to become more and more important to each child as they grew older. These were attachments to unrelated children in about equal proportions to blood relatives —  just as it is among people in bigger cities today, your best friends were not necessarily your siblings or even first cousins. Among the Kua too, close friends were as likely to be children of people your parents do not know well as they are to be the children of your mother’s oldest friend . Even among the Kua I found that some people had lifelong friends who had been born in another language group altogether. I recall being told by a young girl that she always longed to see a best friend who was the daughter of a G/wi woman, one of two daughters she brought with her, after their father died and the widow then remarried a Kua man. This was to clear up my initial confusion, because the new stepfather was the uncle of the girl, so I kept calling this friend of hers by the term for “cousin” until I learned the full history.

Friendships among these hunter-gatherer children were often fraught with sad absences. Because camp membership was fluid, close friends might find themselves parted when their families lived for a time in different camps — whether these were five or a hundred miles apart. So children’s friendships kept getting interrupted and renewed over time, as families moved from campsite to campsite.  As s group trekked to the next campsite children would be eagerly anticipating seeing again those friends they had missed “because our places were too far”.

It was especially hard for children to be parted from friends they had made during the times in the yearly round when camps from different language groups shared a water point.  For as much as a few months, much larger groups of children formed play groups, and Kua children interacted with G/wi, and “Tsassi” and H!ua speaking youngsters, perfecting multi-lingualism, and hearing and translating all sorts of new stories, jokes, games, and dances. Older children in their teens would set off to travel together overnight (segregated by sex), just to spend time with companions in other camps. They visited unrelated friends as frequently as cousins.  There would be mixed language play-groups around the larger camps. “This is how we learn we are all one people, we are all BaSarwa,” one man told me. (BaSarwa is the common term in SeTswana language, meaning “Bushmen”.) It seems thus that a kind of larger culture-group or “ethnic” identity was forged in these childhood playgroups.

To me all of this was achingly familiar – it was like the friendships I had experienced at school, in the various neighborhoods my family lived in. Changing neighborhoods and changing schools sometimes took me too far from my friends to keep frequent contact, and I have lost touch over the years with many friends I had in school and college.  I have made new ones, as most of us do, but have reconnected with older ones through social media.  Humans tend, in general to maintain large individual networks, of both family and friends, and this seems to be true of every culture I have experienced. Humans, besides maintaining long-term individual networks, can also join participatory groups very fast – we evolved to join together into groups quite readily, even very temporary or impermanent groups like chess clubs, study groups, tourist crowds, and selection committees…not just hunter-gatherer camping parties.  None of these groups are necessarily any kind of “in-group” that defined itself in terms of competition or opposition to an “out-group”. So the idea of our evolutionary past being somehow dominated by in-group vs. out-group hostilities just will not wash.

Networks are, of course, not a human invention.  Social networks are also typical of most social species. Among mammals in general, they appear to be associated with larger brains.   Amiyaal Ilany, and Erol Akçay,  at Penn’s Department of Biology in the School of Arts & Sciences, have developed the distribution of what’s known as the “clustering coefficient”, which measures such networks in a variety of social species. A great many studies in the last 10 years highlight the implications of social networks for longevity, disease transmission, or reproductive success.

Individual networking, intergroup cordiality, and fluid membership, do not just facilitate information and gene flow, of course.  I was struck by the following example. There was a possibly gay couple among the Kua. They were older men, both decent hunters, and much sought after to join various camping parties since they increased the meat supply without increasing the number of dependents.

If you look at meat as a common good, shared by the whole camp, then, the more men in a camping party, the lower the dependency ratio.  This means that each other man did not have to work so hard.  At first I thought it was their skilled story-telling that explained why grandfathers were generally like treated like gold.  On reflection, I did the calculations of how much meat they supplied, since they were generally experienced hunters.

Clearly, in hunter-gatherer camps the addition of an older couple often made the difference between the whole camping party being viable (in the sense that people did not perceive themselves to be overworked and hungry) or not.

In the times of year when the camps were clustered closer together around the remaining boreholes, Kua camps actually got smaller and smaller since the hunting success went down in these locations due to local overhunting by the Bantu-speaking farmers.  Anything a man got from a snare or trap-line was pretty small (hares and guinea fowl were often taken) – too small to share with a larger camp group.

Thus at this time of year, it was rare to find more than two families per camp.  People got more and more irritable as the time they had to spend out gathering food and firewood increased, and conflicts and general tension increased. People expressed longings to get back out in the bush.  Even before any sign of rain, people would start leaving. They began by making camps as far from the borehole that was still compatible with daily trips to collect water there.

The problem of risk is solved with mobility and fluidity of group composition and size. Thus, dependent-heavy camping parties could be avoided.  By splitting the workload among up among several camping parties containing adults of mixed age and sex, men and women could still visit their sibling’s camps frequently, but without the obligation to feed anyone there.  The older cousins could go for sleepovers.  Distances between camps in most clusters did not usually exceed half a day’s walk, and was often less than 30 minutes.

Freeing older people from obligatory co-residence with either male or female offspring, and adding friends to the mix, results in further flexibility. Thus, the needful constant reshuffling of personnel, experienced as sociable visiting among hundreds of people interconnected by individual networking over thousands of square miles, contributed to the health and survival of children as each household waxed and waned in size over the years. In many environments, this free movement of people among camping parties can be seen as redistribution of a productive older labor force. They could help when most needed, not according to arbitrary obligation to close kin, and not even limited to membership in kinship groups. That older couple, who had been friends of your friends for so many years that they were called by “fictive” kinship terms, were a welcome addition to your camping party.

The Kua, therefore, needed their friends as well as their families. As do we all.

That concludes the lesson. 🙂

And I would recommend for further exploration of this theme, a book by John Terrell: A Talent for Friendship. For further discussion of hunter-gatherer childhood, see Mel Konner’s book The Evolution of Childhood, and my essay “Culture, Play, and Parenting.”