I believe we relevance theorists missed something important in considering ostension only in the context of what we called ostensive-inferential communication. Ostension, I want to suggest, is more diverse and widespread.

Today’s post is about forms of attention manipulation older than ostension proper. But to begin with, what is attention, and how might it be advantageous to manipulate the attention of others? Attention has been intensively studied in psychology and more recently, in neuropsychology, with competing models and approaches. Judging from my limited acquaintance with this vast literature, the idea that attention aims at selecting the most relevant inputs is a commonplace. I have not, however, come across a worked-out definition of relevance in this literature, let alone a shared one. What one encounters, rather, are common sense examples: inputs that are evidence of potential reward or danger, inputs that may contribute to the agent’s goals are typically relevant and worth processing. True, no doubt. In the next posts, I will argue for a more precise notion of relevance and show how it matters to a better understanding of ostension, but here such a vague and intuitive notion of relevance will do.

So, back half a billion years ago. During the Cambrian explosion, animal cognitive mechanisms became complex to the point where selection of the most relevant inputs became a precondition for efficient cognition and attention mechanisms evolved. When attention first appeared, nothing had yet evolved to manipulate it. Nothing in what animals could attend to in their environment was designed to attract (or evade) their attention. However, organisms stand to benefit or suffer from the behaviour of other organisms, which may be partly determined by attention mechanisms. Hence, once attention-capable organisms evolved, ways to take advantage of their attention and its behavioural effects (or not to suffer from them) evolved in turn. In many species, for instance, the chances of mating are greater if you can attract the attention of potential mates. Cross-species mutualism (say between cleaner fish and their bigger fish clients) often requires attracting the attention of potential partners. And so on.

(Camouflage, used by many prey and predators, is not a means to attract or distract the attention of the other, but to escape it altogether. Sure, it is an adaptation to the risks presented by others’ attention, but still, it may be better not to categorise it as a manipulation of attention proper, nor as a form of communication.)

Manipulation of the attention of one animal by another is typically an adaptive behaviour. It performs its function by influencing the targeted animal’s cognitive states and behaviour in a way that is advantageous to the manipulator. The highly salient red belly of male sticklebacks contributes, by attracting the attention of females and thereby influencing their behaviour, to the reproductive success of males.

Manipulation of attention (or sensory manipulation more generally) is a form of communication in a very broad sense of the term, where communication consists in one organism influencing others by modifying their cognitive states. Often in evolutionary and comparative studies of animals, communication is defined more narrowly as co-extensive with signalling. Signalling itself is defined as an interaction where not only does the communicator produce a signal the function of which is to influence a receiver, but where the receiver decodes the signal and produces a reaction adapted to it.  For signalling systems to evolve, two conditions must be fulfilled: producing a signal has to be advantageous to communicators; reacting appropriately to the signal has to be advantageous to receivers (see David Harper and John Maynard Smith’s 2003 book, Animals signals, and Thom Scott Phillips’s discussion of the issue).

Similarly, many flowering plants in need of pollination attract insects by advertising themselves as a source of valuable nectar. The bright colours and subtle scents of their flowers signal the presence of nectar. In visiting flowers and unwittingly carrying some pollen from male stamina to female pistils, pollinators, for their part, help the plants reproduce: the insects’ reaction to the signal is advantageous both to the insect and to the plant. 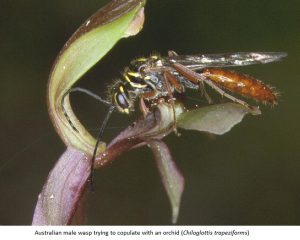 All naturally evolved flowers have the function of attracting pollinators, but not all of them do so by means of signalling. Some species of orchids, for instance, mimic the shape, colour and odour of a female wasp, tricking male wasps to try and copulate with them (see here). In the process, some pollen gets stuck on the wasps, who carry it to another orchid that, again, they mistake for a potential mate. The wasps, in other words, are being tricked into acting as pollinators. From an evolutionary and functional point of view, orchids and wasps are in quite different predicaments. The orchids have evolved to influence wasps by providing them with misleading cues. These cues—the shape, colour and odour of the flower—are adaptations that are quite successful at performing their function. The cognitive mechanisms male wasps use when picking up these cues have evolved to detect genuine female wasps, not orchid mimics. Hence, in being activated by orchid mimicry, the male wasps’ female detector malfunctions. When a cue is an evolved adaptation for the organism that produces it—for instance an orchid—aimed at influencing the behaviour of an animal—for instance a male wasp—by causing some of its cognitive mechanisms to malfunction, this is a clear case of attention manipulation, but not of signalling.

As illustrated by the example of the deceptive orchids (or by the famous case of females birds such as killdeers feigning to have a broken wing in order to attract a predator away from their nest), manipulation of attention is a form of communication that need not involve signalling proper.

Conversely, signalling can be effective without attracting the attention of the receivers. Quite complex pheromone signalling has been demonstrated among Caenorhabditis elegans roundworms, even though, with their few hundred neurons, they don’t do attention (see here).

Among humans, Irenäus Eibl-Eibesfeldt demonstrated in a 1968 article the existence of a universal signal: when recognizing a friend at a distance, humans typically raise their eyebrows for a fraction of a second: mutual awareness is thereby achieved but the signal itself – the “eyebrow flash” – is produced and decoded unconsciously. Or to take an example closer to home, Guillaume Dezecache et al. demonstrated in a 2013 article the existence of unconscious signals of emotion, which help explain emotional contagion in crowds.

In the next post of this series, I will suggest that ostension is a form of attention manipulation that involves a modicum of mindreading (but much less than full-fledged O-I communication). (Juan-Carlos Gomez, by the way, has long been advocating such an idea).