Written by Christophe Heintz on 15 November 2016

The quantity of votes in favor of the Brexit and in favor of Trump surprised most of us. We were surprised that Brexit and Trump voters would reject pretty safe options—remain in the EU and continue with a qualified Democrat president—in favor of obviously risky options. The uncertainty that comes with Brexit and with Trump is, and was, I think, apparent to everyone. If it is true that many people chose to vote for Trump and Brexit in spite of knowledge of the risks, then Prospect Theory can explain why.

Prospect Theory is a major theory in the field of behavioral economics. It explains why and when people are willing or reluctant to take risks. In many cases, people prefer not to take risk. For instance, most people prefer winning a sure $50 rather than taking a risky bet in which they can toss a coin and either win $100 or nothing. But in some cases, people prefer risky options. They do so when they feel that they have lost something. Imagine, for instance, that you’ve been playing roulette and that you’ve just lost an important sum of money. To recoup your losses, you might well take important risk. The choice set that you face is then something like this: either you lose $50 for sure, or you take a risky bet with a probability ½ of recovering your loss, leaving with $0, and a probability ½ of losing $100. The risks and potential gains, are exactly the same as when your options are either to earn $50 for sure or take a bet with ½ chance of either winning nothing or $100. Yet, when it concerns loss, people are much more willing to take risks. While in the winning frame, most people would go for the sure option, in the losing frame, most people would go for the bet. Prospect Theory systematically describes these changing attitudes towards risk: people are either risk seeking or risk averse depending on whether the stakes are conceived as gains or as losses. This in turn depends on whether the potential consequences of choices are states of affair that are better or worse than some reference point—what is considered ‘normal.’

How is that relevant to understanding Trump and Brexit votes? In 1988, Quattrone and Tversky, two behavioral economists, published a paper in which they show that the same attitudes towards risk—risk aversion or risk seeking—manifest themselves when deciding for whom or for what to vote. If you perceive that you or your country has been losing lately, then you’re likely to be risk seeking. If you do not have that perception, then you’re likely to be risk averse. Many of the explanations for the Brexit and Trump votes that we recently read in the news emphasized how frustrated citizens were with their economic situation, and the effect of fear mongering discourses and appeal to lost grandeur. Frustration with the economic situation is directly caused by the Great Recession and the growth of inequalities. Many perceive their current economic and social situation as one of loss domain in the sense that it is much worse than what it should normally be. The political discourses of the Trump and Brexit advocates have framed the stakes in terms of losses rather than gains. The slogans “Make America great again” and “Take back control” clearly refer to the lost grandeur of the past. This sets the reference point as a lost state that was much better than the current one. Also, fear mongering is by definition talking about the frightening (negative) state in which we find ourselves. All this motivates citizens to favor risky options: the gains, even if they are unlikely, are so strongly desired that they induce discounting the very likely losses. 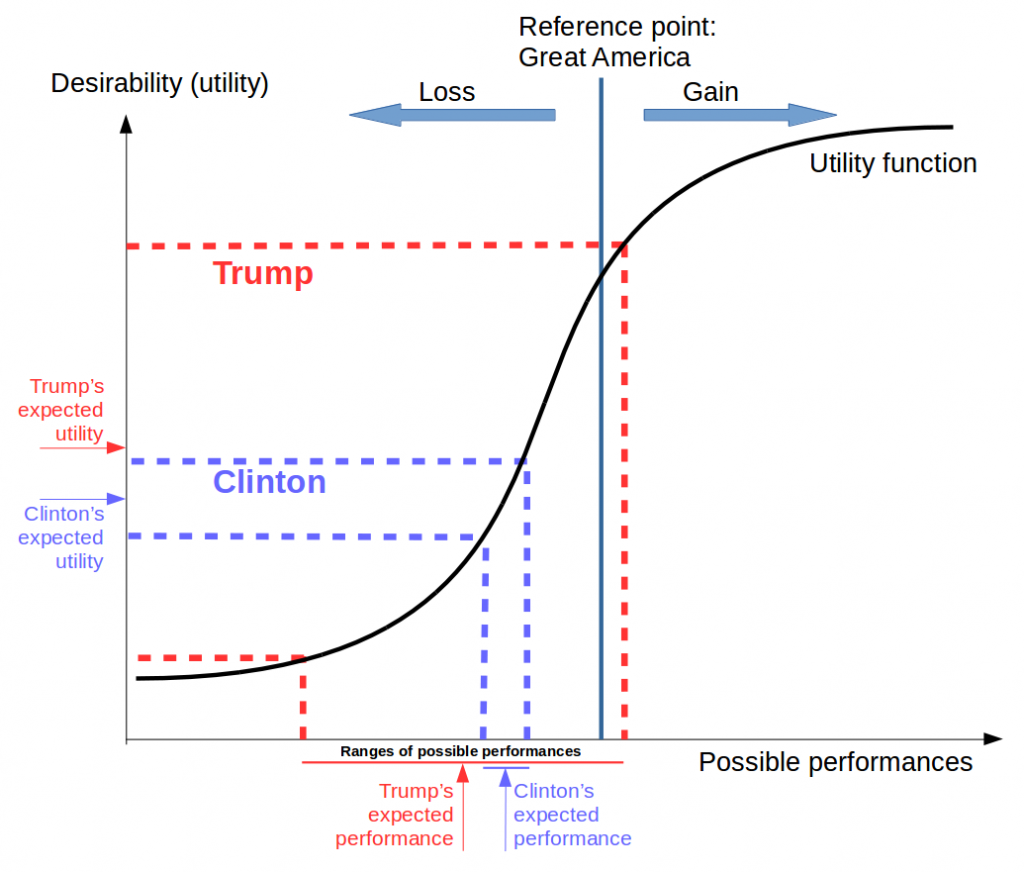 Expected utility of presidents’ potential performances in a loss frame, according to Prospect Theory.

The striking consequences of risk seeking choices, is that one may prefer an option that has on average worst prospects and high uncertainty (wide range of possibilities) to an option that has better prospect on average and low uncertainty. This point can be seen with the graph, which pictures the function that ascribes utility, or desirability, to president’s performance. The shape of the function is specified by Prospect Theory. In particular, the fact that the curve of this function is convex in the loss domain expresses the risk seeking attitude. In this graph, Clinton is represented as having a better expected performance than Trump. But because there is great uncertainty with regard to Trump’s performance and because, in this situation, people are risk seeking, Trump’s presidency ends up being more desirable: the expected utility of Trump’s presidency is higher than Clinton’s in spite of the fact that its expected performance is lower. (I determined the expected utility, pictured by the arrows on the desirability axis, by assuming equiprobability of performances within each range).

With Trump and Brexit voters, we face people who, perceiving that they have lost something, are willing to take high risks. Economic frustrations cause risk seeking preferences, which contribute to motivating votes for Trump and Brexit.