Written by Nicolas Baumard on 1 January 2007

The naive theories of ‘Honey I shrunk the kids!’

Biomorphologist Michael C. LaBarbera has an amazing paper (actually a seven parts lesson, “The Biology of B-Movie Monsters”, Fathom, 2003) on the physics and biology of B-movie monsters (thanks to Arts & Letters Daily for bringing me this one). It shows that cinema creatures consistently violates basic assumptions of biomorphology concerning scaling effects. This makes me wonder why our naive theories of physics and biology are so blissfully unaware of what it means for a living body to travel from Lilliput to Brobdingnag (and back). The picture shows a giant radioactive ant from the movie Them! 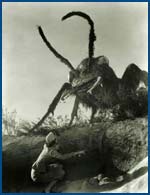 Isn’t she frightening? Well, not that frightening, according to Mr. LaBarbera:

Here’s the trick to defeating the giant ants. You don’t want a rifle, you want a pile of bricks and a good pitching arm. One well-hurled brick hitting a leg and–plink!–the leg goes into local buckling and collapses, increasing the load on the remaining legs. Two more bricks and you’ve taken out all the legs on one side; all the bug can do is scrabble in circles. Three more bricks and the giant insect is completely immobilized. The secret behind this trick is internal buckling of a 2 meters tubular structure; it sounds technical, yet LaBarbera makes it understandable with a bunch of familiar experiments involving toothpicks. It is amazing that physical properties that are so obvious on normal scale should elude us altogether when we come to apply them, not at quantum-mechanics or cosmological levels, but simply in a universe ten times bigger than ours.

“Hopelessly naive” is what LaBarbera calls Hollywood’s approach to giant monsters. That is precisely what interests me: why do our naive theories of biology and physics ignore the most basics scaling effects, like the fact that a mouse does not get hurt when falling from a height of one meter, that King Kong, had he existed, would have crumbled under its own weight the day of its birth, not to mention the astounding effects of shrinking and gigantism on metabolism and heat regulation. An example that sheds light on a well-known habit of ancient poliorcetics:

As J.B.S. Haldane put it in his classic essay, “On Being the Right Size,” “You can drop a mouse down a thousand-yard mine shaft; and, on arriving on the bottom, it gets a slight shock and walks away….A rat is killed, a man broken, a horse splashes.” Haldane was being quite literal.

These facts were known to our ancestors, who used this aspect of scaling to gruesome effect–a common strategy during medieval sieges was to take a carcass of a horse, let it ripen for a few days in the sun, and then catapult it over the walls of the besieged town. On impact, the carcass would indeed splash, spreading contagion throughout the city.

The passage depicting the heroes of Fantastic Adventure struggling with Brownian motion is hilarious. So is this one:

Other movies have played with the theme of tiny people in an otherwise normal world, including The Incredible Shrinking Woman (1981) and Honey, I Shrunk the Kids (1989). But none of these movies ever deals with the problem of what happens to the object’s mass when it shrinks. I can imagine two ways to shrink an object. One would be to start removing molecules, perhaps halving the number in each cycle of shrinkage. But molecules are integer quantities; sooner or later, this strategy is going to lead to half a molecule, which won’t work. (Particularly for biological objects. Remember, each cell in your body only has two copies of your genetic information, one in each strand of the DNA in your chromosomes.)

Another way to shrink an object would be to decrease the distance between an atom’s nucleus and its electron cloud-atoms are, after all, mostly empty space. I’m not enough of a physicist to have any intuition about what this would do to basic physics and chemistry, but one result of this strategy would be to leave the object’s mass unchanged. If volume decreases but mass does not, then density must increase. The shrinkage is sufficiently limited in these movies that we don’t have to worry about dealing with miniature black holes, but an object the size of a cell but the mass of a submarine–as in Fantastic Voyage–is going to pass through the table, the floor, and the earth’s mantle like a hot knife through butter.

These examples (and there are lots more in LaBarbera’s huge essay) are a marvellous case study in folk science, and the way our deeply held physical intuitions can mislead us very simply and effectively. The take-home message for a psychologist is clearly:

(2) naive physics applies the same way on small and great scales (as the alchemists of old had it: what’s high and what’s low are alike, and both behave in the same way).

If you think that your naive theory of biomechanics is of no use for social cognition and has no anthropological relevance, then you’re ignoring a mass of data concerning emotion recognition from gait and posture, and also some more subtle social cues distilled through morphology:

Consider King Kong Lives (1986), a sequel to the 1976 version of King Kong. The premise of the movie is that Kong survives his fall from the World Trade Center (patently impossible, as we saw in Session 3) and is fitted with an artificial heart the size of a Volkswagen, restoring him to his full imposing health. Kong eventually meets a female version of himself captured in the Indo-Pacific, they fall in love, one thing leads to another, and soon Mrs. Kong is expecting.

The scene where Kong Jr. is born was fascinating, but not for anything that happened on the screen. Clearly the directors expected Kong Jr. to be an object of sympathy to the audience, but when Junior appeared I clearly remember that the audience around me looked puzzled, not charmed. The explanation is simple. On screen, the relative sizes of Daddy, Mommy, and Baby Kong were more or less correct, but Junior was a man in a gorilla suit and the audience’s hindbrain knew by the body proportions that this was no newborn, regardless of what the story line or the relative sizes said. We are not fooled that easily.

When I was a kid, my (French) teachers had me learn a nursery rhyme by Robert Desnos; it goes like this:

It states that there is no such thing as an 18-meters ant, and wonders why this is so; I realise I spent all those years ignoring the answer. It was high time Mr. LaBarbera came up with it.

This post was originally published in 2006 on the Alphapsy blog.

I totally agree with Olivier that this sort of movies are very interesting tools for study folk-physics and that cinema’s approach to scientific concept such as scaling are “ hopelessly naïve” as LaBarbera says. On another hand, their interest are perhaps limited if one takes for granted that these movies are made in such a way for people to make sense of their reality as a human world. Heroes are made for us to “identify” with them. In case of The Incredible Shrinking Man, this poor guy is nothing but a victim whose very life is intended to be endangered by destruction, a destruction quite surely irreversible. All that is quite well predictable in the film. The same goes for films like King Kong, perhaps even more so. In this respect, The Incredible Shrinking Man appears as a metaphor of aging and death. So if Scott Carey (the poor guy) could benefit from the biological properties relative to his (always changing) new situation, he would be a sort of hero à la Matrix, not because he would become incorruptible, fighting gods for fun ( a man with a metabolism of an ant can still be crushed somehow) but because he could be something other than a man, a “replicant” in typical Philip K. Dick fashion –something which looks like a human being but that’s all. Accordingly, the sense of narratives would be totally changed. In this respect, the way, for example, size could affect their organism is perhaps not relevant, if not to say inconsistent with the story line. Sometimes I heard people complaining about how lazy Hollywood is about the way monsters in SF movies are conceived. It is. But well…They look very human actually, probably to keep the scale in line with what is familiar to humans, that prevents a great deal of mental adjustments to be made. In my knowledge the exception has been made in Kubrick’s 2001 with the monolith in the moon.

Anyhow, there is no doubt that film industry has no idea at all about the way biology should affect our potential lives! Movies of any genre are good tests for our intuitions. Also interesting are Tex Avery’s cartoons where mice displace holes and coyotes don’t fall into precipices unless they realize that they will…Gravity, after waiting for them to realise their situation, crush them with force. And Coyotte, whose evil desires for the roadrunner are systematically punished by the brutal distortions of the laws of physics, always survives. Criteria of judgment about the character’s mental states are made available by the extensive and systematic use of the violation of physic laws.

This is such an impressive display of cinematographic erudition that I do not know what to add… About your last paragraph concerning Tex Avery, I think it does inform us about naive physics (as regards the fall of Coyotte) and naive ontology (concerning detachable holes), but of course they do so by violating them to produce a comical effect. Also, I always thought it was a pity that no one ever noticed that Coyotte’s fall is directly inspried from the kantian metaphor for the Bird of Reason taking to the skies and flying too far till there is no air under its wings to sustain it (Critique of pure Reason, first preface). If I were a postmodernist philosopher, I would write something about it…

How to Corax your theory of mind
Are humans innately bad social scientists?
Alphapsy Archives