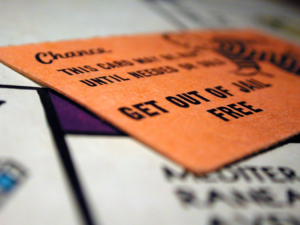 I grew up in socialist Romania and I have played Monopoly since I was 10 with a game brought from West Germany by family friends. I loved the game and the fact that my social value among playmates increased because all of them wanted to play. Though we knew little about markets, banks, finance, or rents, we learned the rules very fast and were hooked. Real capitalism bloomed around us while we played with hotels, railroads and utilities, made fortunes or ended up bankrupt.

For those who don’t know the game, players start with an initial money endowment and take turns to roll the dice and move their token on a circular board. The aim is to acquire ownership over streets, railroad stations and utilities, consolidate them into trusts and invest money into improvements so that other players will pay higher rents whenever their token lands on one’s property. There are chance elements which increase or decrease a player’s position, and players can trade properties. The game is won when all players but one are bankrupt.

I was thus amazed to read what Kate Raworth wrote for Aeon about the unexpected origins of one of the most popular board games. Here is a long excerpt (under Creative Commons):